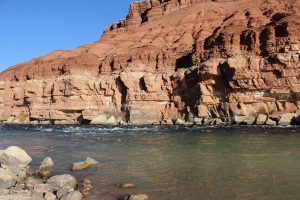 Nearly 200 years ago, Henry David Thoreau wrote, “In wildness is the preservation of the world.”  In his essay “Walking,” Thoreau encourages people to be ‘wild,’ which he likens to ‘absolute freedom’ in contrast to ‘limited freedom,’ which we all experience 24/7 in civil culture.  My longtime and perennial friend Dwight and I experienced ‘wildness’ last week when we fly fished 14 miles of the Colorado River in Marble Canyon south of the Glen Canyon Dam, which created Lake Powell in 1957.

Everyone should be so lucky to experience the wildness of the river far from the madding crowd.  Good for the body, better for the soul.

It was a different type of fly fishing than I learned on the relatively tame Kinnickinnic River during my three years in Wisconsin, but equally rewarding, and more so in some respects.  The fishing was good.  We experienced strikes throughout the day, lost many ‘on the line’ due to our rusty techniques, but we managed to land our fair share, which we immediately released.  I consider trout – particularly rainbow trout – the most beautiful fish.  As tasty as they are, they belong in the river, not the frying pan.

We learned that wild horses roam the canyon wilderness we traversed and were lucky to spot a sole stallion grazing on one of the few banks that did not rise perpendicular to the river like rocky sentinels to surround us as we made our way upriver.

In retrospect, however, it was an encounter with an ancient display of petroglyphs that caught my breath and gave me pause to consider my position relative to time and the universe.  About eight miles upriver, our guide pulled our river runner to a small sandbar to re-rig some gear.  He pointed to a dirt path and said I’d find petroglyphs about 50 yards down the path.  I have much experience with petroglyphs from my years at the Redemptorist retreat in Picture Rocks, and most recently in the North Picacho Mountains, so I eagerly walked up the path in my waders. 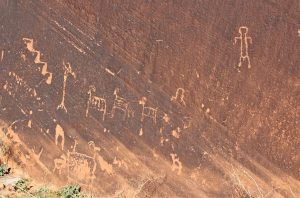 Sure enough, I found a large wall of ancient petroglyphs.  I find all rock art mystifying, but this display was special.  I gazed up the rock wall they were etched into, to the edge of the canyon cliffs hundreds of feet above me.  As I did, time stood still.  I considered with awe that the person who drew these petroglyphs thousands of years ago, stood on the side of the river just as I did.  Then it hit me.  Millions of years ago, this river – the Colorado – was level with the canyon rim so high above me.  As ancient as the artist was, he was a mere child of the universe compared to the time when there was no canyon.  The real artist was the one who patiently carved this canyon with water and invested millions of years to do it.

I recalled the ‘pale blue dot,’ a picture taken by Voyager 1 on February 14, 1990, at a distance of 3.7 billion miles from Earth.  If you look closely, you can see the ‘dot,’ Earth in the center of the light brown band on the right.   Of this picture, Carl Sagan wrote, “Look again at that dot. That’s here. That’s home. That’s us.”

As I stared at the petroglyphs and pondered the artist who left his mark on these rocks, I felt connected to him, who lived thousands of years ago, and to this planet created billions of years ago.  “This is here.  This is home.  This is us,” I thought to myself.  “This planet is our responsibility, and each of us has a role in its preservation.”