In the ‘Gethsemane’ scene in the 2003 rock opera !Hero that considers “What if Jesus was born in Bethlehem, Pennsylvania?” Hero – played by Michael Tait – sings a powerful anthem that asks the question, “Who’s gonna do it, if I don’t step to it?”  It is a formidable and intensely personal question. 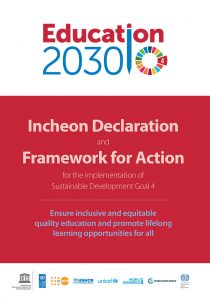 In my continuing research on sustainable development, I read “The Incheon Declaration and Framework for Action for the implementation of Sustainable Development Goal 4 [education].”  In their opening statement, the authors aver,

“UNESCO together with UNICEF, the World Bank, UNFPA, UNDP, UN Women and UNHCR organized the World Education Forum 2015 in Incheon, Republic of Korea… [and] adopted the Incheon Declaration for Education 2030, which sets out a new vision for education for the next fifteen years.”

Sounds good.  I continued to study the 83-page declaration.  In it, I found no solutions, but plenty of “This is what we oughta do’s,” ‘we’ being government.  In fact, the declaration contains

“Our vision is to transform lives through education, recognizing the important role of education as a main driver of development and in achieving the other proposed SDGs.”

“We reaffirm that education is a public good, a fundamental human right and a basis for guaranteeing the realization of other rights. It is essential for peace, tolerance, human fulfillment and sustainable development. We recognize education as key to achieving full employment and poverty eradication.”

“We reaffirm that the fundamental responsibility for successfully implementing this agenda lies with governments.”

These affirmations are solid, but the declaration sadly admits that the goals for achieving ‘education for all’ have not been reached.  I believe there is little – if any – accountability.  If the ‘fundamental responsibility’ for implementation lies with governments, governments have failed.  This brings me back to Hero’s question,

This morning, I heard Golden States Warriors co-owner Palihapitiya’s statement, “Nobody cares about what’s happening to the Uyghurs, OK?”  His statement resulted in quite a ruckus.  I’ll start by asking if you care about what’s happening to the Uyghars in China, and follow by suggesting you probably don’t know a thing about the Uyghars, much less how to pronounce it.  If you don’t know a thing about them, then you probably don’t care what’s happening to them.  Modern Uyghars are primarily Muslim and are recognized by the Chinese government as a ‘regional minority.’  Since 2014, Uyghurs in China’s Xinjiang region in northwest China have been affected by extensive controls and restrictions which the Chinese government has imposed upon their religious, cultural, economic, and social lives.

On 8 March 2021, the US-based nonpartisan think tank Newlines Institute released a report that concluded “that China is responsible for breaches of each provision of Article II of the Convention” and “bears State responsibility for an ongoing genocide against the Uyghurs, in breach of the Genocide Convention.”

Genocide… among the most abominable words in the human language.  While I am certain that Mr. Palihapitiya opposes genocide, I am equally certain that if people are unaware of a situation, they will not take action to resolve it. 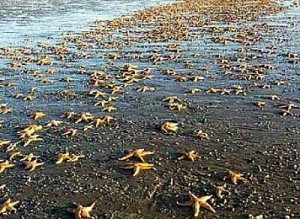 We each have an important role to play.  We each have starfish to save.  Within the next few days and weeks, we will present a way in which you can become actively involved in promoting sustainable development.  Please stay tuned.