As Autumn ushers in colder winds from Canada, friends 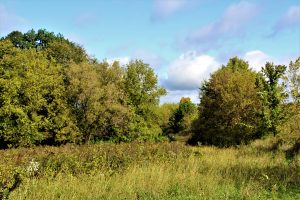 and acquaintances ask me – as I continue my sabbatical in a 10×16 shed with best friend Clarence – “What will you do when it’s cold?”  I appreciate their concern and curiosity.  Construction on the house is progressing so slowly that I will consider myself fortunate if we are able to celebrate Thanksgiving in the completed and habitable home we envisioned when we committed to it in May.

What will I do when it’s cold?  “Dress warmer,” is the simple and obvious answer.  I suspect that is the same thing you do when the weather turns colder, and you probably turn the heat on in your house.  I will not deny that there are challenges to be faced.

Americans are soft.  The higher up the food chain, the softer we are.  Think about it… do we really need “Alexa” to turn our lights on and make perfectly brewed coffee for us in the morning?  I am proud to be an American and I am glad I am an American – most of the time – but I will not deny that American culture focuses on materialism, and that has made us soft – physically, mentally and spiritually. 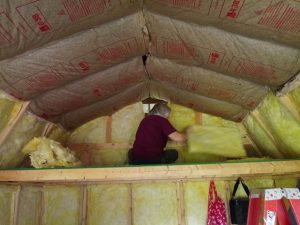 As nighttime temperatures dipped into the lower 50s at the end of August, Mrs. tVM and I installed insulation ‘bats’ in the hobbit house.  In September, temperatures dropped into the 40s, and already in October, overnight forecasts have been in the upper 30s, though I don’t think we’ve been there yet.  I have an electrical line hooked up primarily for my small refrigerator and hotplate, and to charge phones and computer.  Last week, I added a space heater.  It has kept the hut at 68-degrees throughout the night.

What will I do when it’s cold?  Last winter, I watched a documentary about Richard Proennecke.  Back in the 70s, Proennecke built a cabin by hand in the Alaskan wilderness.  He was in his 50s when he built it.  He lived there for 25 years.  At one point in the film, he comments that the outside temperature is sub-zero, but that it is a toasty 38-degrees in his cabin.  ‘Cold’ is relative.  In my book The Hamsa, I write that Babcia tells her grandson to love the cold.  “To be a good skier,” she says, “you must love the cold.”  That is good advice as you prepare to experience it, the cold. 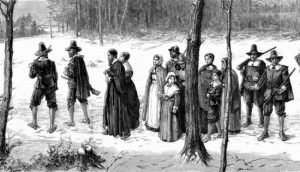 What will I do when it’s cold?  I will think of those early pioneers who settled this grand state of Wisconsin, who settled New England, who searched for the Northwest Passage, who scaled the Rocky Mountains…  Had they been deterred by the cold, the world would be a far different place.  Cold is relative. 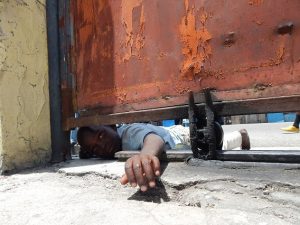 What will I do when it’s cold?  I will consider the millions of people around the world who constantly battle and conquer the elements and in doing so, create lives for themselves and for their families that – although they may not mirror middle-class America – enable them to live productive, happy lives as members of one human race.  I think of my friends in Haiti.  Earthquakes and hurricanes do not hold them captive.  It is a corrupt political system that historically has denied the common man the opportunity to lead a productive life.  Man is his own worst enemy, not the cold.

What will I do when it’s cold?  Pray more and be thankful that I have the opportunity to make a choice to stay here and love the cold or bailout for warmer climes.  After all, for me, it is a choice.  Today I choose to stay.