The Lenten season is a special one.

By definition, Lent is a period of 40 days when Christians remember the events leading up to the passion and death of Jesus.  The 40 days are called Lent after the old English word “lengðu” meaning ‘lengthen’ because Lent occurs as we approach summer when the days start to get longer.

As a child, my mother ensured that my brother and I were in strict compliance with every rule and regulation in canon law, written, verbalized, and/or implied.  Easter baskets filled with chocolate rabbits, marshmallow chicks, and other sweet sundries were part of the season along with Easter egg hunts and Easter parades, but they were always secondary to the religious requirements of the day as dictated by Roman Catholicism.

I’ve long since abandoned the commercial aspects of Easter, and my spirituality has taken its own path but remains centered on Jesus as the Word incarnate.

The Via Crucis – the Way of the Cross – is an important aspect of Lent.  Formalized by the Franciscan priest Leonard of Port Maurice in the early 18th century, I prayed the stations in an obligatory way as a young boy.  The violence and brutality of the reenactment of Jesus’ final journey as a man from Pilate’s court to the crest of Golgotha intimidated and frightened me.  As I age, the same 14 stations inspire me in a way that nothing else can. 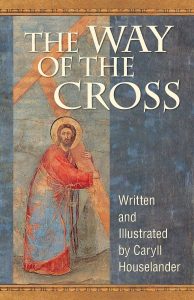 There are ‘official’ [recommended/guided] ways to pray the stations.  Of these, perhaps the most popular is the meditative way introduced in the 18th century by Alphonsus de Liguori, founder of the Redemptorist order.  Personally, I use the short book – The Way of the Cross – written by English mystic Caryll Houselander and published in 1955, the year after her death.

Two years ago, I wrote about the ninth station, “Jesus Falls the Third Time.”  The third fall presents one of the most valuable lessons that Jesus imparts upon mankind:  to fall [failure] is acceptable provided that it is followed by the effort to rise and stand up.

This year, my attention is drawn to the fifth station, “Simon Helps Jesus to Carry the Cross.”  As Simon is reluctantly drawn into Jesus’ final journey, the Cyrene and the Nazarene teach us two important things…

From Simon – in the words of Caryll Houselander,

“We must be ready to carry the burden of anyone whom we meet on our way and who clearly needs help, not only those who ‘deserve’ or seem to ‘deserve’ help.  Everyone is our ‘business’ …”

From Jesus, we learn that everyone needs help and we must be willing to accept it.  As Ms. Houselander writes in her meditation,

“[Jesus] accepted the help of Simon, who was half ashamed to help him… [Jesus] accepts the help of those who make themselves absurd in charity, those who are ‘exploited,’ ‘taken in,’ made ‘fools’ for his sake…  [Jesus] was grateful for the help of the thief on the cross, the generosity of this derelict dying man who acknowledged Christ’s goodness… he was grateful to this broken sinner who acknowledged him with his last breath…”

The lesson of the 5th station is as simple as it is important:

We are never alone, even in our darkest hour.

A helping hand is always near to strengthen and inspire us.  Reach for it and grasp it with surety and confidence.