Waffles were a special breakfast when I was a kid.  While pancakes were a regular staple raising our kids in the 70s, 80s, and 90s, we didn’t invest in a waffle iron because it was difficult to make enough waffles to feed five kids at one time.

As an adult, I rarely ate breakfast until recent years when I decided it would be good to start the day with a small breakfast.  Two years ago, I acquired a waffle iron and made waffles three, sometimes four mornings a week until I moved off the map in July.

I love to cook and I despise wasting food.  It irks me to read that according to the Natural Resource Defense Council [NRDC] 40% of the food produced in America is wasted and ends up in landfills.  Believe it or not, wasted food is the number one contributor to landfills.  So what does this have to do with waffles?… 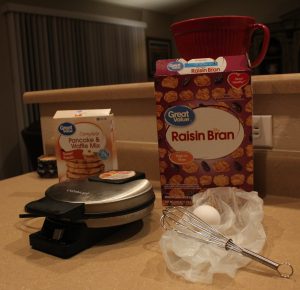 I purchased an 18.7 oz. box of generic raisin bran the other day.  Regardless of how frugal I am, I always face a conundrum as the bag empties:  either there is too much for the final bowl or too little.  Yesterday, rather than eating more than I cared or needed to eat, the box was left with too little for this morning’s breakfast.  The light bulb came on as I considered what to do…

I crumbled the remaining raisin bran, added an equal share of generic waffle mix, tossed in a generic egg and added enough generic milk to make a batter to fill the waffle iron.  Even Clarence eyed me with canine suspicion.  I pressed on and anxiously waited for the red light to turn green as fragrant steam rose from the circumference of the waffle iron.  Finally, the moment of truth arrived. 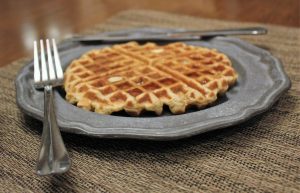 I spread a thin coating of fake butter on the hot waffle and topped it with 100% pure, generic maple syrup.  It looked good, smelled good, and tasted even better!

Humorist Calvin Trillin once said, “The most remarkable thing about my mother is that for thirty years she served the family nothing but leftovers. The original meal has never been found.”  Leftovers are a good thing, and a bit like making waffles with raisin bran.  The proverb ‘Waste not, want not’ was allegedly first recorded in 1772 but had an earlier ‘willful waste makes woeful want’  version recorded in 1576.  They advise the same thing:  if you don’t waste what you have, you will avoid lacking or wanting it in the future.

That’s good advice.  Get creative with your leftovers and you’ll be wanting less in the future.