Consider a book of poems as something useful and meaningful to give as you ponder your Christmas gift list.  Poetry books are available and appropriate for all ages and genders, and sure to satisfy all spiritual, philosophical, technical and scientific frames of mind.  The poet excludes no one.

“Take some time to read poetry.  Spend weeks reading as many different poets as you can.  By devoting all this attention to the individual word, phrase, and stanza, you will learn a greater attention for language, and this attention will eventually show in your own work.”

Twenty years later, I continue to read poetry, as much for pleasure as to improve my writing skills.

The Rag and Bone Shop of the Heart 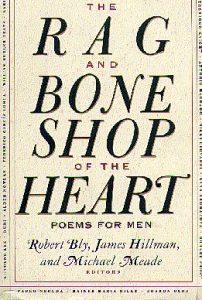 Many years ago, I discovered The Rag and Bone Shop of

the Heart in the Redemptorist library at the Picture Rocks retreat center in Arizona.  First published in 1992, it’s subtitle Poems for Men has been replaced with A Poetry Anthology.  I liken it to a globe:  a pre-December 1991 globe will designate the geographic area the Union of Soviet Socialist Republics.  If you inspect a post-December 1991 globe, the area is designated Russia.  Whatever…  I was so taken by the collection that I gifted a copy to each of my three sons and to my son-in-law.

Over the summer, I pulled two books from my library and placed them on the corner of my desk where they remain this morning:  The Rag and Bone Shop of the Heart and Good Poems, American Places, a collection of poems selected by Garrison Keillor.  Every day – most often early in the morning – I read one poem from each collection.  The daily exercise will last about one year.

Speaking Well and Speaking Out

Over the weekend, I entered section six of The Rag and Bone Shop, “Language:  Speaking Well and Speaking Out.”  The five-page preface to the section is written by James Hillman (1926 – 2011), an American psychologist possibly best known for his 1997 book The Soul’s Code: In Search of Character and Calling, which outlines what he calls the “acorn theory” of the soul. This theory states that all people hold the potential for the unique possibilities inside themselves just as an acorn holds the pattern for an oak tree.  Mr. Hillman introduces us to the 26 poems contained in this section with the thought that the strength of our society directly correlates to the way we use language.

“Confucius supposedly said that the rectification of society starts with the rectification of its language. This suggests that a careful use of words comes before new laws, new programs, and new leaders. Laws and programs begin in words, and if the words of our leaders are entangled in garbled speech, intoned as nasal whining, bereft of inspiration and wit, and flatter than the commercials that surround them, then we can’t expect the society to prosper.

“Yet as late is the 1930s and ‘40s, Senate debates and presidential campaigns demanded strong oratorical ability. In the last century you paid compliment to the young man who was acourtin’ your daughter or was hired for a job by describing him as “well spoken.” A man’s word was his honor because in his word was his spirit. Schools used to teach elocution; colleges, public speaking. Rhetoric, once upon a time, was an educational necessity alongside math and logic. We learned poetry in elementary grades by heart, with heart. As Dylan Thomas says, his magical way with words begin with listening to the incantations of nursery rhymes, the playful power of language.”

Although 20 years Mr. Hillman’s junior, I, too learned poetry as a boy in school “by heart and with heart.”  In October, I loaned a friend what I consider the greatest ‘buddy film’ of all time, Gunga Din.  I wish he had returned it.  When another friend saw the title of the object that passed between our hands, he recited the opening lines to Kipling’s immortal poem,

“You may talk o’ gin and beer
When you’re quartered safe out ’ere,
An’ you’re sent to penny-fights an’ Aldershot it;
But when it comes to slaughter
You will do your work on water,
An’ you’ll lick the bloomin’ boots of ’im that’s got it.”

Delighted, I smiled and offered the concluding lines,

“Though I’ve belted you and flayed you,
By the livin’ Gawd that made you,
You’re a better man than I am, Gunga Din!”

Yes, growing up in the ’50s, poetry was an essential element of our education – primary, secondary and higher.  I am pleased that today, my 7 and 11-year old granddaughters are required to learn and recite a poem every grading period in their Arizona primary school.  Even so, the educational emphasis is on language as a tool, not on language as an art.  Language is compatible in both arenas and one must not be sacrificed for the other.  As Mr. Hillman writes,

“These older ways with speech have developed into “language skills,” “information access and delivery,” “communication.” Language has mainly become a tool for sending communiqués “in no uncertain terms.” Exuberant exaggeration, hellfire sermons, boasting, swearing and cursing, talking dirty, fantastic alliterations, skip rope and nonsense rhymes, ethnic dialects in regional accents, to say nothing of simply beautiful poems, all fade in the electronic light of the TV screen. Yet as the Trobrianders (an indigenous tribe of Papua New Guinea) say: “The force of magic… resides within man and can escape only through his voice.”

The Danger of Literal Language

As keepers of the flame, we are tasked with promoting the art of language so that its magic is not lost on messages structured solely to promote the materialism that pervades our unwary society.  We must maintain the core of language to enhance the purpose of future generations to make the world a better place to be.  Mr. Hillman explains the danger of literal language,

“When the magic of language withers, we are left in the desolate condition Charles Darwin describes as a “loss of happiness,” and our minds become, as he says, “a kind of machine for grinding general laws out of large collections of fact.” He here refers to the literal level of language which gives accurate accounts, such as the length of a board or how to put up a folding cot. When Frost speaks of a dreary kind of “grammatical prose” and Thoreau, of the language of common sense, they are warning about the deadening effect of literal language. This literal style is also the “ordinary speech” that no longer suffices when people are moved by great forces of fear, joy and sorrow (Orpingalik [an Inuit poet and spiritual healer]). Thoreau insists, to stay only with this restricted language produces “brain-rot.” 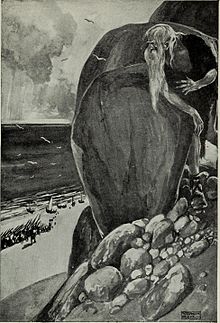 “Thoreau recommends extravagance for breaking through usual language… “Amergin and Cessair,” an ancient Celtic incantation, show the power of extravagance. Bombast, scurrility, farfetched similes in startingly sensuous images, and the humongous immensity of their vocabularies enchant the eye as it reads, the ear as it hears… All good poems are love poems – not because they tell of love and lovers, but because they reveal the poets love of language…”

When People and Animals Spoke the Same Language

I am attentive to the language of my dogs Hans and Clarence, and I firmly believe it is my obligation to learn their language, not theirs to learn mine.  When a dog barks, for example, he barks not to annoy me, but because he has something to say that he considers important.  You should no more tell a dog not to bark than to beseech a baby not to cry.  I agree with the Eskimo assertion that at one time, humans and non-humans shared the same language.  Unfortunately, due to our misconception that we are superior to animals, we have – in the words of wilderness expert Tamarack Song – redefined ourselves as a rational species and allowed our perceptive abilities to atrophy.  Mr. Hillman comments, 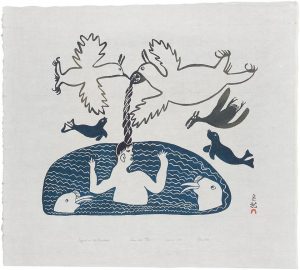 “If, as Nalungiaq (an Inuit storyteller from the early 2oth century) says, “in the very earliest time… people and animals spoke the same language,” then the rectification of language requires closeness with our animal nature. Then the vitality of our language resides as much in the sound of our words and beat of their rhythms as in their meanings…  Good language asks to be spoken aloud, mind to mind and heart to heart, by embodied voices that still retain the animal and by tongues that still delight in savoring vowels and the clipped spitting of explosive consonants.

“Robert Frost insists that “Words in themselves do not convey meaning… the sound of them does…” By teaching men to speak well, men learn to speak up and out. Isn’t this precisely what is needed, according to Confucius, to refound society?”

We take language for granted.  In relying upon it solely as a tool to get things done, we limit ourselves to a ‘grayscale’ world devoid of color and all the exciting, beautiful and invigorating emotions that our true selves long to express.

Encourage your family and friends to re-capture the magic of words through the gift of poetry.  I leave you with my favorite… 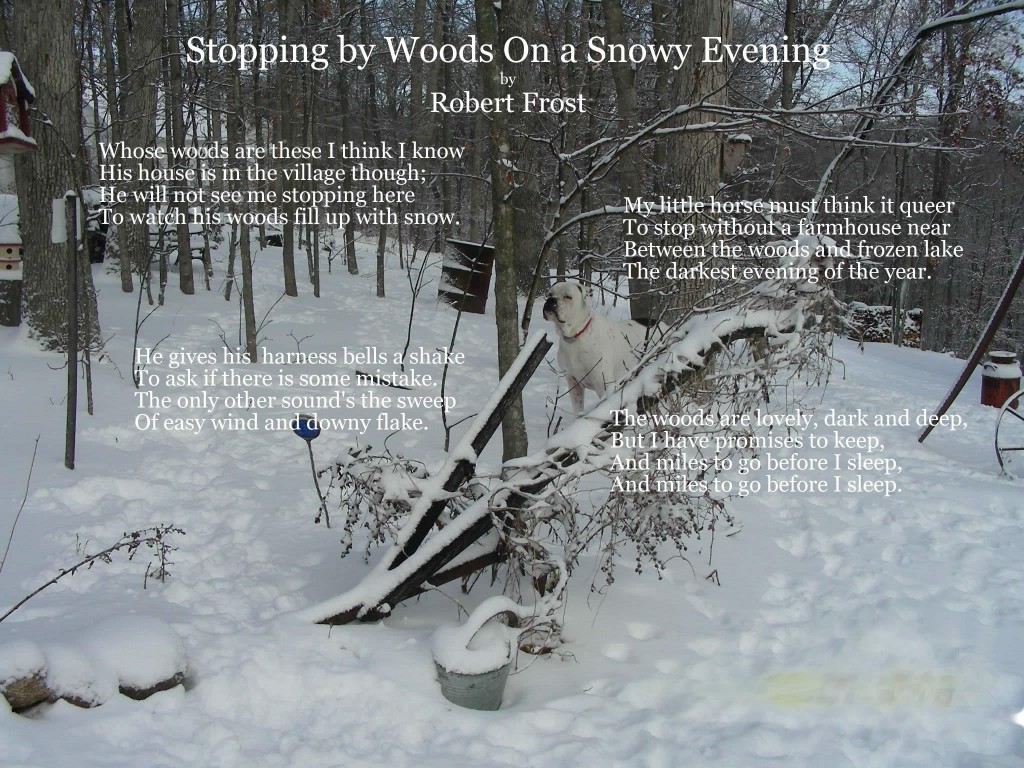