Several years ago, my friend Gerry told me the story of the star thrower, which I often refer to in posts and general conversation.  It is a terrific story with an important message: you can choose to make a difference regardless of the circumstances stacked against you. 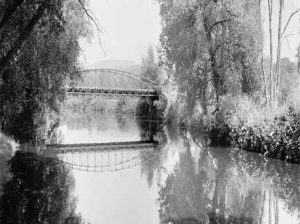 I have come across another story that I am certain to tell many times.  I found it on the Internet, posted in 2004 by a Microsoft employee.  He attributed the story to Dennis Connor, an associate professor at Gonzaga University.  Mr. Conner is unaware of the story’s origin.  Ronald Rolheiser tells the story in his 1999 book The Holy Longing and says it is a story “quite famous in social justice circles.”  I will call it The Town by the Bend in the River story and this is how it goes ….

Once upon a time, there was a town that was built just beyond the bend of a large river.  One day some of the children from the town were playing beside the river when they noticed three bodies floating in the water.  They ran for help and the townsfolk quickly pulled the bodies out of the river.

One body was dead so they buried it.  One was alive, but quite ill, so they put that person into the hospital.  The third turned out to be a healthy child, who then they placed with a family who cared for it and who took it to school.

From that day on, every day a number of bodies came floating down the river and, every day, the good people of the town would pull them out and tend to them – taking the sick to hospitals, placing the children with families, and burying those who were dead.

This went on for years; each day brought its quota of bodies, and the townsfolk not only came to expect a number of bodies each day but also worked at developing more elaborate systems for picking them out of the river and tending to them.  Some of the townsfolk became quite generous in tending to these bodies and a few extraordinary ones even gave up their jobs so that they could tend to this concern full-time.  And the town itself felt a certain healthy pride in its generosity.

However, during all these years and despite all that generosity and effort, nobody thought to go up the river, beyond the bend that hid from their sight what was above them, and find out why, daily, those bodies came floating down the river.

Rolheiser uses the story in his book to demonstrate the difference between charity and social justice.  “Private charity responds to the homeless, wounded and dead bodies,” he writes, “but it does not of itself try to get at the reasons why they are there.  Social justice tries to go up the river and change the reasons that create homeless, wounded, and dead bodies.”

I suspect a similar spending ratio exists in a number of areas like hunger, war, racism, the ecology, etc.   A quick look at the 2017 Federal Budget* proposal shows just that:  over 75% of the budget is directed at mitigation, and the balance toward prevention.  We have a huge military budget to prepare for in the hopes of preventing war, not in creating peace; the trillion dollars to medicare and health is directed at people who are already sick, not at preventing sickness; unemployment pays people who don’t work rather than creating jobs so people aren’t unemployed.

Oversimplification?  You bet, but in the long run, like Mr. Litwicki suggests with homelessness, we have to reverse the flow of resources from relief to prevention.

I give to charitabler organizations.  I believe that is the nature of the human and one of our callings in life.  But as I hand money to charity, I have to look around the bend in the river.  Why is this child child hungry?  Why is this man homeless?  Why do we fight wars?

I am certain the answers are there.  I am equally as certain that unless we ask the right questions and look for the right answers, the relationship between relief and prevention will remain out of balance.  It is our human imperative to look around the bend in the river.