I have worked in the homeless community in Tucson ever since I met my friends Carl and Chuck in 2012 in the book store at the Redemptorist Renewal Center in Picture Rocks, Arizona.  Homeless himself for a while, Carl is the Director of the St. Francis Shelter in Tucson where Chuck is a board member and advisor.  Our common interest in books and things spiritual has evolved into a relationship that still thrives.

In the early days, I helped with the website for Brother David’s Poverello House, and now with the St. Francis Shelter.

My experience with homelessness has not always been positive.  Sometimes, I am opening my arms and other times, I am scratching my head.  I continue to help when I can.

In recent weeks, Carl as asked if I can interview homeless men and run their stories on the St. Francis website.  I have done that before with mixed results but agreed to do it again.

As I researched a story early this morning, I found a post we wrote five years ago for the Poverello House in July 2015.  It is as important a street story as you will hear, so I decided to post it again on the St. Francis website this morning.  Given the nature of the post, I want to share it with readers of my website as well.  Stories like this need broad exposure. 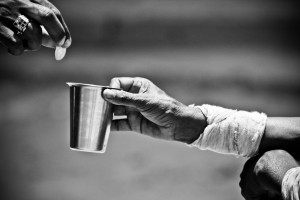 This week, I was witness to the purest act of giving I have ever experienced.  What this man did sets an example for each of us to follow …

Any time someone donates money to the Tucson Poverello House for homeless men through the website, I am alerted to the donation and I send out a thank you on behalf of Brother David whose daily regimen limits his time, and I am pleased to do it for him.  A typical donation is less than $100, and I have never seen a single donation of more than $500 come through the website.  That changed this week.

On Monday, we received a sizeable four-figure donation.  I wanted to learn more about the donor before I sent the thank you letter.  When a donor uses PayPal, he is required to enter his email address and physical address.  When I checked out his address on Google Earth, it came up as The Primavera Foundation’s Homeless Intervention and Prevention Services Office.  I called the office.  No one with the donor’s name is employed at the Primavera Foundation, and I noted that his email address was not associated with Primavera either.

After consulting with one of the Poverello House board members, I sent the thank you note from Brother David (who I always copy).  Brother David is currently away from Arizona tending to his elderly parents.

The following day, I received an email from Brother David.

“Thanks for sending [the donor] the thank you on my behalf.  I am not sure if you know who [the donor] is.  It is quite a dramatic story, but knowing [the donor], he would not want it made public.  [The donor] is homeless and he volunteered to help run the men’s winter shelter.  So the $2,000 came from his work helping to run the shelter.  He did not want to be paid, so he gave Poverello House the stipend he earned.  Isn’t that something?”

Isn’t that something?  From my perspective, with all due respect to Brother David, that is quite an understatement.  I have been around many donors who are adamant about insuring that everyone is aware of their donation.  I’ve even seen ‘monuments’ erected to donors for far less significant donations than this one. 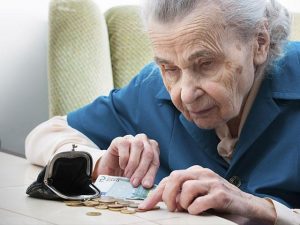 I am mindful of the gospel stories when one person’s penny is all she has, but she gives it gladly.  I reflect on Jesus telling the rich man he has to give everything away …. And this week, I witnessed a homeless man with nothing, a man who was asked to do something and did it willingly, and when he was given money for his services, he joyfully passed it on to his homeless brothers.

This nameless man humbles me.

As Jesus says in the Gospel of Matthew, “When you give to the needy, do not let your left hand know what your right hand is doing.”

Next time you pass a homeless man, woman or child on the street, STOP!  Give that homeless person all you can give.  If you cannot find it within yourself to do it, regardless of which excuse you come up with, remember:  if you do not help him, another homeless man will.