Those of us who have lived in and near mountains understand why. They are large. They are silent. They are sentinels. I thought about that this morning on my bike ride as I gazed north at the Sacaton Mountains south of Phoenix. Last week, I hiked the foothills of the Tucson Mountains in search of the medicine wheel.

I have been blessed to gaze upon mountains from the homes and places I have lived for 50 of my 70 years. They humble me and help me put my life in perspective.

I grew up in the Berkshire Hills of Western Massachusetts under the tutelage of Mt. Greylock, Mt. Everett and Mt. Washington. 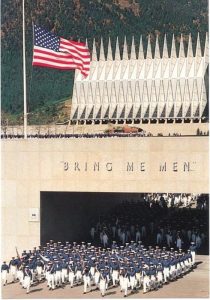 They were beautiful, but I didn’t understand how small they were until I arrived on campus at the Air Force Academy at the base of the Rampart Range of the Rocky Mountains. Pikes Peak rose in the distance. It was huge and the words written above the ramp that we marched down from the cadet area to the parade field were all the more meaningful for it…

“Bring me men to match my mountains…”

One year after graduation, I was an air force pilot at my first operational base… in Alaska. Alaska defines mountains and all bow toward the great Denali in the Alaska Range. Back to Colorado for two years and on to Upstate New York and the Adirondacks (we still wonder why we ever left), then off to Arizona to establish roots that will endure for the remainder of my life.

Mountains. They touch the soul and lift the spirit. Trappist monk Thomas Merton tells us in New Seed of Contemplation,

“The great, gashed, half-naked mountain is another of God’s saints. There is no other like him. He is alone in his own character; nothing else in the world ever did or ever will imitate God in quite the same way. That is his sanctity.”

We are people of many faiths, but the mountain we climb is the same.

Influenced by Mahatma Gandhi, Indian spiritual teacher Eknath Easwaran expresses it as well as any,

“However varied the paths, when we actually make the journey, we cannot help but end up at the same place. I’m often reminded of nineteenth-century explorers’ search for the highest mountain in the world. Tibetans pointed to Chomolungma, Nepalis to Sagarmatha, Chinese to Shengmu Feng. In Darjeeling, Westerners looking for ‘Peak XV’ were directed to Deodungha. All, of course, turned out to be talking about the same peak, best known today as Mt. Everest.”