“Thank you for your service” is a popular greeting when people learn that you are a veteran of the U.S. Armed Forces.  I do not recall that greeting in the 60’s and 70’s when soldiers returned from Viet Nam.  Times change.  Attitudes change… sometimes for the better, other times…

As a member of the now-defunct Air (re-designated ‘Aerospace’ in 1968) Defense Command (ADC), my job was indeed to directly defend American freedom.  ADC provided air defense for the continental United States to deter the ever-present threat of the Russian bear!  I was a pilot and flew the single-seat, Mach 2+ F-106 with the 49th Fighter Interceptor Squadron out of Griffiss AFB in Upstate New York.  ADC was disbanded in 1980.  By the way, the closed air base, once home to a mighty fleet of B-52 bombers was the site of Woodstock ’99…

Thank You for Your Service

I believe that the phrase “Thank you for your service” was popularized in the 90’s after the First Gulf War.  I have no recollection of the term prior to that.  Not all veterans take kindly to the phrase, and the reasons for their displeasure are many.  For many years, I was annoyed when people said that to me.  Now, I accept it in good spirit and acknowledge the good intentions of those who care to offer it.

Years ago, I read that we do not ‘bless’ one another enough.  It is true that well-mannered children and adults will say, “Bless you” when someone sneezes, but that appears to be the extent of our ‘blessings’ outside of formal, religious services.  In broader terms, however, to bless a person or another creature is to ‘call’ and invoke good will upon that which you bless.  I agree we do not bless one another enough, and I think we as a race should make ‘blessing’ those we meet as habitual as saying hello or “Thank you for your service.”

Aleena is a cashier at the River Falls Family Fresh grocery store.  Mrs. tVM and I have gotten to know her well.  The store is not busy when we shop at 0700, so Aleena and her manager Dawn have time – more importantly take time – to engage in personal conversation.  Last week, they were both on vacation.  The shopping experience was vastly different.  The folks at the register were nice enough, but it was very different without Aleena and Dawn.  When we shopped yesterday, it occurred to me to tell Aleena, “Thank you for your service.”  I will make that habitual.

Shantel is our mail carrier.  If she does not pass me and Hans or Clarence on the street, she will always leave dog biscuits in the mailbox for them.  Sunday, Shantel was making special deliveries in the neighborhood as USPS is apt to do on ‘days off.’  When she saw Clarence and me, she pulled over, stopped and climbed out of the mail truck.  “Clarence!” she called.  She dropped to a knee, so she could give Clarence a special hug, which he greatly appreciated and responded to with slobbery kisses.  “Thank you for your service and friendship,” I should have said but didn’t.  I will the next time I see her.

We Are Called to Serve not to be served 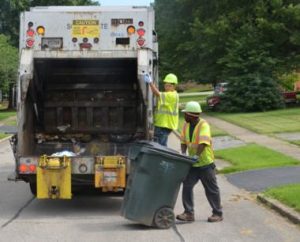 There are so many people that deserve our “Thank you for your service,” people we know, people we don’t know, priests, doctors, garbage collectors, city maintenance crews, cashiers… even those gazillion nameless people who man the ‘customer service’ telephones around the world…   the list is endless.

I make the commitment today that I will thank people for their service and to ‘bless’ them as a gesture of greeting.  To call goodwill upon my fellows and the creatures around me is a good thing and will make the world a better place to be.