“Spoiler Alert:”  at over 1,000 words, this is one of the longer posts we’ve written.  “Click” the arrows to open comments.

Though disheartened when I learned that Goodyear listed “All Lives Matter” as unacceptable as part of its zero-tolerance policy, I take strength that others do believe that all lives matter and consider it a worthy mantra to live by.  In response to our own “Your Life Matters” post on July 12th, one inspired reader contacted me from Texas.  He took action and painted his truck to spread the word. 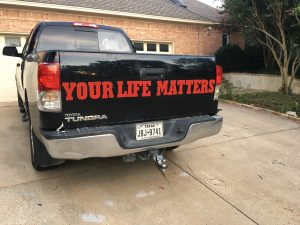 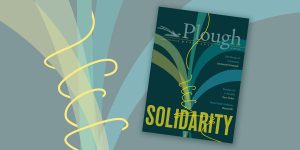 “Plough Quarterly” Autumn 2020 issue focuses on ‘Solidarity’ and addresses it appropriately and effectively in many ways.  In this post, I share several statements that are included in the issue that I find meaningful and worth your consideration.  We have reached a critical stage of human development where the solidarity of the human race in support of all creation is essential to a rewarding and just future for our planet.

“… [Covid-19] has spread precisely because we aren’t autonomous individuals disconnected from each other, but rather all belong to one great body of humanity.”

Referring to Dostoevsky’s great work The Brothers Karamazov, he quotes a dying teenager who tells his mother,

“Every one of us has sinned against all men… Everyone is really responsible to all men for all men and for everything.”

True Solidarity
“This true solidarity is opposite of the false solidarities of today’s identity politics on both the right and the left… false solidarities regard people primarily as bearers of one or more group identities based on nationality race, class, or gender – and view these identity groups as inevitably antagonistic, locked with other groups in bitter struggle for power. Here, “justice” means little more than a tense balancing of group interests. As a result, those who embrace such a worldview are liable to make recourse to coercion and even violence, as ugly episodes at some of the protests this past summer illustrate.”

My final offering from Mr. Mommsen’s editorial also comes from The Brothers Karamazov,

“As for each man being guilty before all and for all, besides his own sins… when people understand this thought, the kingdom of heaven will come to them, no longer a dream but in reality.”

Later in the magazine, Mr. Mommsen includes his interview with Dr. Jacquelin Rivers and her husband Rev. Eugene Rivers.  Following the events in Minneapolis, Mr. Mommsen asked them – she, the executive director of the Seymour Institute for Black Church and Policy Studies, and he, the founder and director of the Institute – about race, solidarity, and how the church should respond.

Shift Spending
“… in some cities where these perverse incentives exist, the slogan “defund the police” may be valid; let’s shift spending to where it helps instead of harms. But in other parts of the country, the problem is the opposite. There may be need to pay police more generously in order to attract higher quality officers, provide better training, and achieve greater accountability.”

For over 20 years, Dr. and Rev. Rivers have met weekly on Wednesday mornings to talk over challenges facing the neighborhoods they minister to.  Dr. Rivers shared an insightful comment on what they’ve learned,

“… so many want to make clear that we have good cops.  In poor black neighborhoods, people want to have police.  They recognize that not every police officer is Derek Chauvin – that although some structures of policing need to be changed, there are many cops who work for the good of the people.”

When Mr. Mommsen asked, “So the answer is not to abolish the police… “ Dr. Rivers replied,

Another Truth
“Absolutely not. Because there is another truth that few want to talk about. As horrendous as Derek Chauvin’s actions were, the number of young black men who die at the hands of police officers is a tiny fraction of the number who dies at the hands of other young black men. We’re not often willing to engage that question; it’s so much more difficult to respond to. I can decry the racist white cop when it’s Derek Chauvin. What do I do when it’s my son, or my nephew, or the little boy who grew up next door to me, who is the murderer?”

Dr. Rivers and Rev. Rivers insist that we cannot ignore the power of prayer when seeking solutions to the challenges we face.  Dr. Rivers affirmatively states,

“… we have to approach it with prayer.  That’s a thing the church can bring to bear that these radical young white people cannot.  They don’t understand the true nature of the problem… “

“… we’ve got to be willing to pray, seek God’s face, humble ourselves… intercessory prayer is an indispensable political resource for struggle.” 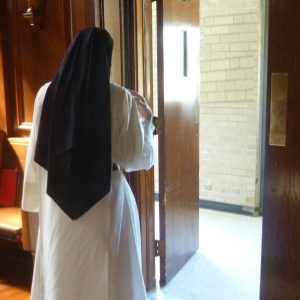 The final piece of this exceptional journalism that I will reference comes from an article by Sister Dominic Mary Heath, a Dominican nun at Our Lady of Grace Monastery in Connecticut.  In her article “Solidarity Means Giving Yourself,” Sister Dominic Mary references Karol Wojtyła, Pope John Paul II,

Commitment to Good
“Solidarity” he wrote in his 1987 encyclical, On Social Concern, “is not a feeling of vague compassion or shallow distress at the misfortunes of so many people, both near and far. On the contrary, it is a firm and persevering determination to commit oneself to the common good; that is to say to the good of all and each individual because we are all really responsible for all.”

Clicking on Facebook is not Solidarity
“… solidarity is not an emotion. Those experiences people have on social media – little bursts of righteous indignation, warm feelings of like-mindedness, the rewarding sense they’ve done their part by clicking “like” or “share” – [this] is not solidarity… solidarity is a commitment to an objective standard called the common good. The common good isn’t the sum of individual interests, as though the greatest number of students getting their way were the greatest good for the classroom; it’s the ideal good for society as a whole, the sum total of social conditions allowing all people to reach fulfillment.”

“[solidarity] is the conviction, carried out in action, that I am my brother’s keeper and he is mine; what it asks me to give my brother is nothing less than myself.”

“… any social project that gets human dignity seriously wrong (Margaret Sanger’s movement and Antifa come to mind) may garner support, but remains fundamentally incapable of creating solidarity.  “When a man does not recognize in himself and in others the value and grandeur of the human person,” warns John Paul II, “he effectively deprives himself of the possibility of benefitting from his humanity and of entering into that relationship of solidarity and communion with others for which God created him.  In other words, if we see our neighbors as less than fully human – if immigrants are useful objects and cheap labor, if refugees and the unborn are an inconvenience or threat, if the elderly or racial minorities are invisible to us – we cannot spend ourselves for their good in any genuine way.””