We inhabit a world of chaos, and in it, silence is a rare commodity. Noise pollution is everywhere.

In his book Silence in the Age of Noise, explorer Erling Kagge writes,

“…the world’s secrets are hidden inside silence.”

I often think of the 46th Psalm,

“Be still and know that I am God…”

As 2019 draws to a close, middle son Brad and I headed north to Flagstaff to snowshoe. We covered 2.5 miles in two hours, a good first outing and long enough to work up a good sweat and a rapid heartbeat. We worked at 8,000 feet near the base of Humphreys Peak, Arizona’s highest natural point in the parent range of the San Francisco Peaks. The trail’s initial ascent insured a challenging workout that made the 16o outside air temperature seem like a sauna. 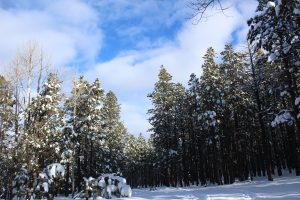 The day’s highlight was not the physical activity nor the beauty of the Coconino National Forest.

Thirty minutes into the trek, Brad stopped, raised his arm and asked, “Did you hear that?”

I stopped. “No. I didn’t hear anything.”

We stood there in the deepest silence I have ever experienced.

As a young man, I took the silence I was blessed with for granted. The most startling I recall – but did not focus on – included our cabin on Mt. Washington MA in the ‘60s; survival training in Colorado’s Rampart Range in 1967; arctic survival in Alaska’s wild west interior near Fairbanks in 1973; and life on our farm at the base of the Adirondacks in the late ‘70s. There were other moments and periods of silence I took for granted as well. I regret it. I greatly enjoyed my wilderness experiences in Wisconsin, but I never escaped the sound of aircraft flying in and out of the Twin Cities across the St. Croix River. It is different in Northern Arizona, at least it was yesterday. 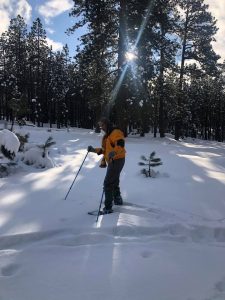 Silence is powerful and puts a person in touch with himself. I look forward to experiencing more in the Arizona wilderness, both desert, and mountain. The drive to Humphreys Peak was three hours. Excepting Phoenix, it was beautiful. I suspect you abide within three hours of some spot in the wilderness where you can immerse yourself in silence. I encourage you to do it. Your time will be well spent.