Thanks to our good friends, Mrs. tVM, Clarence and I spend two hours each day in the fresh, open air surrounded by fields and forest. With the exception of an infrequent airliner passing overhead, there is no noise pollution and we are immersed in the uplifting calls from a wide variety of songbirds.

The variety of birds inspired me to download the Audubon app to identify and keep track of sightings. In a mere two weeks, we’ve identified 14 different species. 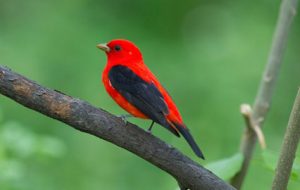 As a young boy, I attended an Audubon camp every summer not far from our home in the Berkshires. I recall seeing a Scarlet Tanager at that camp. The Scarlet Tanager is somewhat smaller than a robin. Its body is redder than a cardinal’s and its wings are jet black. It is a beautiful bird. In the 60 years since that first encounter as a boy, I can count on one hand the number of times I have seen a Scarlet Tanager in the wild.

Two days ago as we drove down the dirt road from ‘the hill,’ – average speed on the dirt road is 5mph – Mrs. tVM pointed and called out, “Look at that beautiful red bird! It’s not a cardinal.” She was correct; it was not a cardinal. Perched in the greenery on the side of the road were a Scarlet Tanager and his mate. We watched them flit about the trees for a full minute and then moved on feeling blessed that we had crossed paths with such a beautiful and rare creature, yet the story does not end. 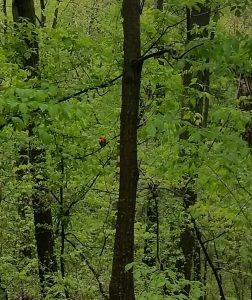 This morning in the same location, we saw the male and female again. Mrs. tVM managed to take a picture with her phone camera. If you look closely, you can see the male in his deep red finery in the center of the picture. He has encouraged us to keep our camera with us for future sightings.

Nature surrounds us. Its call is as beautiful as the rewards it offers to those attentive to it. Please don’t take it for granted.