I recently read an article discussing the benefits of reusable shopping bags, something I see occasionally but have not given much thought to despite seeing pictures of animals desperately trying to escape a plastic bag someone carelessly allowed to meander in the public domain. Reading the article, I also recalled how surprised I was when several weeks ago I actually took the time to read the lid of the recyclable garbage container to learn that plastic is not allowed. I have learned that the cost to recycle plastic bags outweighs their value, so most recycling facilities do not accept them so they are thrown out with the rest of the trash. Things I’ve learned about plastic and paper bags… 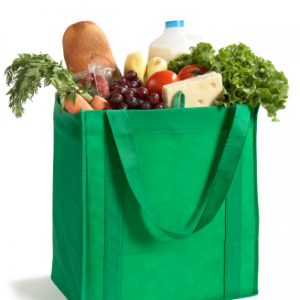 With those thoughts and others in mind, I decided I would do my share to make the world a better place to live in. Mrs. tVM and I purchased 10 reusable shopping bags on Amazon for less than $30. Each bag is advertised to hold up to 50 lbs., which the ad claims to equate to “2-3 bags of grocery stuff.”

Wednesday is our grocery day because the local store, Family Fresh offers a 10% senior discount on Wednesdays. Apply that to your own weekly grocery bill and you can see why we go to Family Fresh on Wednesdays, plus the fact that the people we encounter there – customers and employees – are very friendly. Yesterday was the first day we used our reusable bags. For starters, the claim is correct: each bag will hold up to 50 lbs. of groceries. The bags are strong and easy to carry.

We were pleasantly surprised to learn that we received a 5¢ discount/rebate on every reusable bag. We used five and received 25¢. If we did that every week, the bags would pay for themselves over a year.

Each bag folds “into itself” to make a 5”x5” easily stored and manageable packet. I keep a couple in the glove box of the vehicle. They are always handy.

Bottom line, when I weigh the benefits against the downside – and I can’t come up with a negative – there is no reason not to grocery shop with reusable bags. It may seem like an insignificant gesture, but the more shoppers who turn to reusable bags and say ‘no’ to plastic and paper… You do the math.

Ain’t none of us goin’ to make it out of this world alive, so we have to hang in there together. Let’s start with a small effort to use reusable bags.