Originally posted one year ago in March 2021, I believe this post is worth another reading.  tVM.

This is the time of the year when many people of many faiths attune themselves to prayer, fasting, and almsgiving, what Catholics refer to as the three pillars of Lent.  Regardless of your religious and spiritual persuasion, this is a time when each of us can reflect upon exactly what it is that we do believe.

As Easter approaches, I reflect on my personal credo…

That is what I believe.  That is my personal credo.

Some say his beatitudes embody Jesus’ teachings.  I will not argue that, but I favor one story in particular of his many stories and two of his actions to be at the heart of the example he sets for the human race, and by keeping that story and those actions always in mind, our chances of making better choices and making the world a better place to be, are greatly enhanced.  They define how to best relate to all of creation.  Perhaps, they form the three pillars that explain why I believe what I believe.

If you are not familiar with the story Jesus tells of the good Samaritan, you can find it in the Gospel of Luke, chapter 10, verses 25-37.  In brief, a traveler is waylaid, beaten and robbed and left to die on the side of the road.  Though many ‘good’ people pass by the beaten man, only one, a Samaritan comes to his aid.  The Samaritan’s actions can be described in many ways, but I believe the story emphasizes the fact that we are all family and indeed, we are our brother’s keeper.  In fact, we are stewards of Earth… all life matters and we are responsible for it.

The Story of the Good Samaritan
A man was going down from Jerusalem to Jericho when he was attacked by robbers. They stripped him of his clothes, beat him, and went away, leaving him half dead.

But a Samaritan, as he traveled, came where the man was; and when he saw him, he took pity on him. He went to him and bandaged his wounds, pouring on oil and wine. Then he put the man on his own donkey, brought him to an inn, and took care of him. The next day he took out two denarii and gave them to the innkeeper. ‘Look after him,’ he said, ‘and when I return, I will reimburse you for any extra expense you may have.’

Jesus turned the world upside down and redefined human relationships in his encounter with the adulterous woman.  You can find it in the Gospel of John, chapter 8, verses 1-18.  Jesus confronts a woman who has been caught in the act of adultery.  The authorities prepare to stone her in accordance with the law.  When asked how he would handle the situation, Jesus suggests that the person in the crowd without sin should cast the first stone.  That simple suggestion changes each of us from being the judge of another person’s actions to a judge of our own, and it defines unconditional love whereby we acknowledge that we are all created ‘good,’ and although each of us has faults and shortcomings, and each of us makes bad choices, we are all worthy of love, and therefore forgiveness.  “Neither do I condemn you.  Go your way and sin no more!”

Jesus and the adulterous woman
“Teacher,” they said to Jesus, “this woman was caught in the act of adultery. The law of Moses says to stone her. What do you say?”

They were trying to trap him into saying something they could use against him, but Jesus stooped down and wrote in the dust with his finger.

They kept demanding an answer, so he stood up again and said, “All right, but let the one who has never sinned throw the first stone!” Then he stooped down again and wrote in the dust.

When the accusers heard this, they slipped away one by one, beginning with the oldest, until only Jesus was left in the middle of the crowd with the woman.

Then Jesus stood up again and said to the woman, “Where are your accusers? Didn’t even one of them condemn you?”

And Jesus said, “Neither do I. Go and sin no more.” 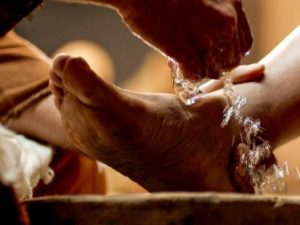 Of his many acts of courage and love during his final days and hours on earth, I believe the single most important one was Jesus’ willingness – even more, his compulsion – to wash the feet of his close friends and followers at the final meal they shared.  That action perfectly exemplifies our role in life as human beings:  we are here to serve, not to be served.  We are here to serve each other and to care for the planet we inhabit.  We are the stewards of Earth, not its masters.  There can be no greater achievement than to serve our brothers and sisters and all creation with the humility it takes to wash another man’s feet.

As we prepare for the Christian Holy Week, keep Jesus’ words and examples foremost in your mind.

We are our brother’s keeper.

Each of us makes bad choices, but we are all worthy of love and forgiveness.

Serve each other and care for the earth with humility.