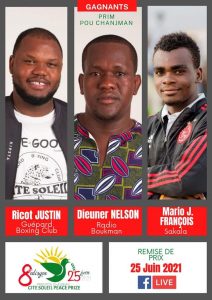 I am pleased to report that my friend and associate Justin Ricot in Haiti was announced as one of the three 2021 heroes awarded the Cité Soleil Peace Prize.  The deep significance of the award can only be measured against the background from which it comes.  Cité Soleil is generally regarded as one of the poorest and most dangerous areas of the Western Hemisphere.  To be awarded the annual peace prize in this environment is truly extraordinary.

Justin’s award is the 8th edition of the prize created by another Haitian hero, Louino’ Robillard in 2014.  Always at the point of the spear, Robi questioned why only gang leaders and politicians received recognition in Cité Soleil when there are so many young people who risk their lives to make positive change in the gang-ruled ghetto.  To show these people that their work and efforts were noticed, he created the Cité Soleil Peace Prize.

Despite incredible odds against them, people like Justin stand tall and are committed to make their world a better place to be.

Justin was born in Cite Soleil on December 26, 1990.  He has four brothers and six sisters.  He was married on the same day – December 26 – just last year to Cherline Monfiston.  The newlyweds remain in Cité Soleil because his heart and soul are with the young children and teenagers he has helped through boxing for five years.

I met Justin through my work in Haiti in 2016.  He and his friends shared a vision to help young people through boxing.  They call their organization Guepard Boxing Club of Cité Soleil [GBCCS].  Their idea was to train upwards of 200 children and teenagers three or four days each week and to feed them after each training session.  Although I have worked with non-profit organizations in the past, I prefer to work directly with someone like Justin.  Direct giving – from my perspective – eliminates the bureaucratic organization and costs associated with it and maximizes the effectiveness of monies offered.

Working together, in 2017, we had an incredible year that included a 6-week camp during summer vacation, a museum trip for hundreds of Cité Soleil kids to the national museum in Port-au-Prince, and school funding for over 20 students.

The COVID pandemic which began in 2020 made it impossible for Justin and his friends to continue training, but he has managed – when money is available – to feed 180 children, four days each week.  While the food is critically important to the children he serves, Justin’s objective is much deeper.

“Anything we can do for the children to keep them off the street without the gang influence that always surrounds them is a good thing,” he says.  “During the pandemic, we continue to feed the children, but we will get back to training.  My goal is to see each child go to school and have access to health care.”  He also has plans to help the families of the children he feeds and trains to repair their homes, which are in dire need of maintenance.”

Because of his commitment to his community, he is one of three recipients of this year’s Cité Soleil Peace Prize.  “Justin’s life is centered on the volunteer work he does with the children of Cité Soleil,” Robi explains.  “He puts his will and his very being into the work he does, and he is not afraid to take personal risks on behalf of the children he serves.  Justin Ricot encourages young people to be positive in a dark world, and he teaches them discipline through boxing training.  ‘Success.’ Justin tells the children, ‘does not depend on where you come from, but on what you can accomplish in life.’”

Justin Ricot is living proof of what he believes in.  His actions speak louder than his words.  I am proud to be his friend.