As I prepared to park at Dwight’s company this morning, two young men approached me and asked in barely discernable English if I was “Sandy *****.”  When I answered ‘no,’ they asked if I knew him.  I noted a parachute logo on one man’s jacket.  Since we stood a stone’s throw from SkyDive Arizona, I suggested in my ungrammatically correct Spanish that they head to SkyDive.  They explained that they had already been there and were told ‘Sandy’ is not a part of SkyDive.  We were able to overcome our language barrier – an appropriate follow-up to our last post “Never Too Old to Learn.”

When they showed me a message on their phone, I saw the address they were looking for was in Arizona City, about 10 miles away.  Apparently, their phones wouldn’t work, so I called the number on the message.  Sure enough, it was Sandy and he was looking for them.  “Okay,” I said, “I’ll have them there in 15 minutes.”

We raised a seat so one could sit in the back with Clarence who was his friendly, gentlemanly self, and the other climbed in front.  Thankfully, my Spanish was significantly better than their English.  On the 20-minute drive, I learned they are members of the Chilean Army and are visiting the United States for the first time to train on parachute rigging.  They are in their mid-30s.  One is married with a young daughter.  Both love dogs.

When we reached our destination, one passed this medallion to me in his handshake.  They were very grateful.  I was reminded of one of my favorite lines in a poem by Samuel Green…

“No one should be lost when someone else knows the way.”

1974… Stationed in Alaska, my roommate Mel and I decide to escape the numbing January cold and head to Hawaii for five days.  It is a spur-of-the-moment decision and Mel is supposed to get cash from the bank.  We arrive in Maui early the next morning.  We are penniless.  Mel never got to the bank.  We attempt to cash a check, but local banks and hotels will not cash an out-of-state check.  We don’t even have enough money to get back to Honolulu for our return flight!

A middle-aged woman overhears us as we discuss our predicament.  “Excuse me,” she says, “I couldn’t help but listen to your discussion with the front desk.  I have a son in the Army.  If he is ever faced with a similar predicament, I hope someone helps him.”  She proceeds to cash a personal check for $500!

No one should be lost when someone else knows the way. 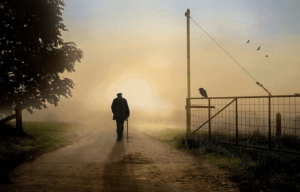 Knowing the way is not limited to physical, geographic directions from point A to point B.  That woman taught me a lesson that has survived five decades, a lesson I put to good use this morning.

On the subway an old
Polish man takes me in charge,
rides two stops past his own
to make certain I find
the right place to get off.  When I try
to thank him, he shakes his head
no, forget it.  No one, he says,
should be lost when someone else
knows the way.