In 1979, my wife gave birth to our second child, a girl.  I was shocked that a female could issue from my loins.  Such was the limited vision of the world that I had those many years ago.  I wanted to name her ‘Jean Marie,’ Jean for me and Marie for her mother, but friends of my parents had recently named their daughter Jean Marie, and my wife would not agree, so we named her Stefanie Jean, Stefanie because there are 12 apostles and five fingers on each hand, and Jean for me in my imperfect self.  Stef may be the toughest of the bunch, and she is currently the head women’s soccer coach at the University of Minnesota.  Bless you Stef.  You have made your parents proud.  By the way, I haven’t a clue of the fate of that other Stefanie — or was it the traditional Stephanie — Jean.  I think we erred on that one, Marie! 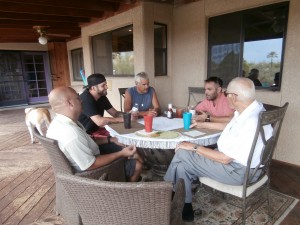 To accompany our one daughter, Marie and I produced — not unlike Fred MacMurray — My Three Sons.

Each is special in his own way, proud of their sister who I know is proud of each brother.

I was blessed this afternoon to share barbecue shrimp and Portabella mushrooms with my three sons along with their grandfather.  This may have been a rare occurence on July 7, 2013:  my three sons, their grandfather and me.  The day would have been less special without their mother, Marie, my wife of 39 years and Nick’s wife Terri of 10 years who took this picture.  Bless you and thank you all.  You are not so special after all, Fred MacMurray.  I have three sons, too!