Willie Morris was 61-years old in 1995 when he published My Dog Skip, a memoir of growing up in Yazoo, a small Mississippi town in 1943.  He died four years later, six months before the release of the wonderful film his book inspired.  I’ve watched the film many times, most recently last Friday evening when Mrs. tVM was babysitting across the St. Croix River in Minnesota.  I never tire of it.

“Memory is a funny thing.  Recollections slip in and out and around in time leaving plenty of room to weave and backtrack and drift and glide.

“My fondest memories are of my childhood days…”

I think there is great truth in those opening words, and on many levels.

It seems the older I get the more my memory returns to the days of my youth.  As Christmas approaches, I think back to the Christmases of the 1950s.  Each year when I watch “A Christmas Story,” I am filled with visions from my youth.  Ralphie’s school is identical to Pomeroy Elementary that I attended in Pittsfield, Massachusetts in the ’50s; even the flagpole is situated exactly where it was at Pomeroy.  Higbee’s department store is identical to old Pittsfield’s England Brothers where I had my first encounter with the real Santa Claus.

I have asked my grandchildren, “What did you get for Christmas last year?”  Most have much difficulty coming up with an answer.  I remember two Christmas gifts.  One year – 1955 I think, the year after Uncle Ernie retired after a 30-year career in the Marine Corps – we visited Uncle Ernie and his family who lived on the coast in Beaufort, South Carolina not far from Parris Island.  I remember three things from that Christmas.  My brother and I caught fiddler crabs on the sandy beach. My mother raised Cain because I wet the bed on Christmas Eve and embarrassed her.  I received a Revell Grumman F9F Panther model; the plastic was blue. 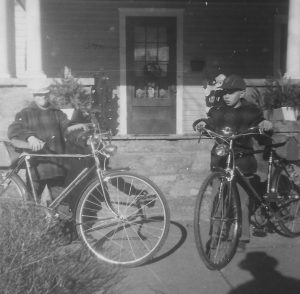 The other Christmas gift I remember is a Huffy Sportsman 3-speed bicycle in 1959 or so.  My first bike was a used, rusted clunker, but it got the job done, the Huffy, though was about as good as it gets in 1959.  I could fly on that Huffy and rode it everywhere.  Typical of THE ‘big’ gift, my brother and I each got one to match the identical flannel winter coats we wore.  I think my mother thought we were twins, at least she dressed us that way until we started growing peach fuzz.

This winter of 2018 is the first winter since 2008 when I have chosen not to ride my bicycle – a 21-speed Trek [the cheapest ‘good bike’ money can buy] – in the heart of winter.  That was nothing special in Tucson but riding a bike in Wisconsin during the winter has been a challenge in 2016 and 2017 that I was able to manage.  Not any more… 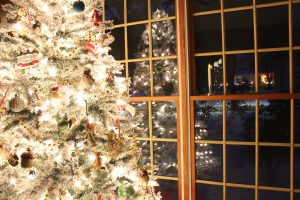 If you are lucky, you have a fireplace, luckier still if you can look out the window and see snow on the ground.  It’s a blessing we too often overlook.  Dim the lights and sit before that fireplace with a warm cup of cocoa and return to the days of your youth with memories of the spirit that continue to linger and sweeten with each passing Christmas.