In 2010, Ash Wednesday occurred on February 17th. Mrs. tVM and I attended the early morning service at the Redemptorist Renewal Center (RRC) in Picture Rocks, Arizona, 3.5 miles from our home on the edge of the Saguaro National Park to the northwest of Tucson. It was the first Ash Wednesday service I had attended in over 40 years. I felt peace as I left the small chapel that morning and asked, “Why don’t I do this every morning?” For the next 7 years – until we returned to the four seasons in Wisconsin – I attended daily Mass at the RRC. I would arrive at the center at 0500 in the morning to pray and contemplate, attend Mass at 0730 and return home – or to work prior to retirement. When people asked why I did it, I would tell them, “It makes me feel whole.” My relationship with the Redemptorists and the Sonoran Desert that surrounded their retreat facility was fruitful and satisfying. It is what I miss most about my time in the desert. 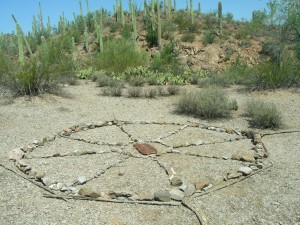 On the summer solstice in 2013, I walked into the desert following Mass to do a vision quest. Just short of two miles, I found the remote spot that I planned to spend the next 24 hours at. My first action was to construct a medicine wheel that I would use during my contemplative activity.

Stone structures have been erected by humans since the beginning of time. Medicine Wheels also known as Sacred Hoops were commonly used by Native American Indians in sacred rites and rituals. Perhaps the best known of these structures in the United States is the Medicine Wheel in the Bighorn National Forest in Wyoming. Unlike the most famous stone circle, Stonehenge in Great Britain, Native American stone circles were not towering structures, but rocks laid on the ground. Typically, a medicine wheel has a center circle of stones and an outer circle of stones connected by spokes, also made of stone.

The Medicine Wheel is aligned to the north for a very specific reason. Many Native Americans acknowledged seven directions: north, south, east, west, up, down and inward. During my time at the wheel – at that vision quest and visits that occurred weekly during subsequent years – I followed this practice with these thoughts in mind.

My friend Father Paul asked me to make a brochure for sabbaticants and visitors to the RRC who might like to hike to the medicine wheel and spend contemplative time there. I did as he asked. We have been gone for three years now. I wonder if the medicine wheel is still there and if people still use it…

I was discussing the medicine wheel with my friend recently and found the template to the brochure on my computer. I was going to send him a copy, but as I reviewed it, I believe it contains a ‘spiritual practice’ that many people can find value in. For that reason, I wrote this post. One does not need to be in the desert to do this. You can live in a 10×10 Manhattan high-rise apartment and do it just as effectively. 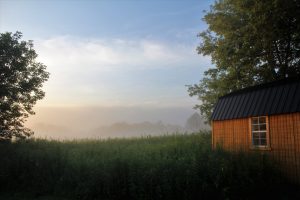 I am blessed again to be ‘off the map,’ and as I gaze out my hobbit hut window at the nearby forest, I commit myself to construct another medicine wheel here on this land.