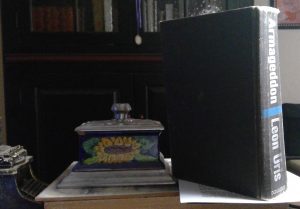 Fifty-one years ago – nearly to the day – I read Leon Uris’s novel of Berlin in the aftermath of WWII, Armageddon.  I still retain that first edition though the dustcover no longer exists.  I read the book over a weekend in the spring of my senior year at the United States Air Force Academy.  I am a slow reader, but I devoured this 632-page novel in two days, a personal record.

I physically highlighted two passages that continue to maintain a prominent place in my brain even as age begins to take its inevitable toll.

As the war in Ukraine completes its third week, and as Mrs. tVM listens in the adjacent room to President Zelensky as he delivers his speech to Congress, I am reminded of the two passages…

“Mr. President,” he began hoarsely, “gentlemen.  A few years ago we concluded a war with the naïve hope that an accommodation could be achieved with the Soviet Union to bring us a lasting peace.  I shall not insult the intelligence of this distinguished body by a recounting of tragic errors made – not by you and me alone – but by the temper of the American people.  We know that all that has prevented total collapse has been that thin line of British and American troops on the European continent… If there is one lesson we should have learned it is that the Soviet Union looks upon diplomacy as merely another means of waging war.  They do not come to the conference table to seek peace or solutions… they come to seek victories.”

Igor shook his head.  “We don’t learn, either of us.  The greatest single mistake made by the Soviet command was not to understand how much an American loves his country.  You see, Colonel O’Sullivan… a Russian loves his just as much.”