I think for many people the promise of heaven is so indescribably glorious that they tend to dismiss their time on earth as if it were the obligatory time one spends at a gate in an airline terminal waiting to board a flight to Jamaica.  That’s too bad because this life we live on earth is real and full of awe and wonder and not to be overlooked or taken for granted.  This life is real and it is meant to be lived.

There is no explanation as to why I am reading Gilead – winner of the 2005 Pulitzer Prize for Fiction – by Marilynne Robinson.  I’ve never read anything by Ms. Robinson and those of you ‘in the know’ may be shocked that I’ve never heard of her.  Although I cite literary awards in my writing, they don’t mean much to me either, so I can’t explain why or how I came to read Gilead. 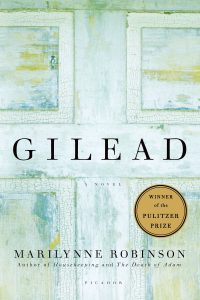 As Wikipedia summarizes the novel, “It comprises the fictional autobiography of the Reverend John Ames, an elderly Congregationalist pastor in the small, secluded town of Gilead, Iowa, who knows that he is dying of a heart condition. At the beginning of the book, the date is established as 1956, and Ames explains that he is writing an account of his life for his seven-year-old son, who will have few memories of him.”

On page 56 of my Gilead copy, Mrs. Robinson’s protagonist writes…

“I have been thinking about existence lately. In fact, I have been so full of admiration for existence that I have hardly been able to enjoy it properly…

“I feel sometimes as if I were a child who opens his eyes on the world once and sees amazing things it will never know any names for and then has to closes its eyes again. I know this is all mere apparition compared to what awaits us, but it is only lovelier for that.  There is a human beauty in it.  And I can’t believe that, when we have all been changed and put on incorruptibility, we will forget our fantastic condition of mortality and impermanence, the great bright dream of procreating and perishing that meant the whole world to us. In eternity this world will be Troy, I believe, and all that passed here will be the epic of the universe, the ballad they sing in the streets. Because I don’t imagine any reality putting this one in the shade entirely, and I think piety forbids me to try.”

Like John Ames, I have been thinking about existence lately, more, it seems, the older I get.  A year ago, several good friends died.  While I could site a medical condition that you could say was a causal factor, I choose to believe they died of old age.  I can attest to the fact that each lived life as fully as possible.  The cup was always half full and never half empty.  Jim died at 94 and played nine holes of golf every week.  Larry flew airplanes.  Jessica trained dogs.  Paul reveled in the beauty of Lake Champlain.  Early this month, Barbara Berson died in Seattle.  She, Paul and I were classmates at Pittsfield High School.  I kissed her once but she wouldn’t remember.  We lost touch after graduation in 1967.

I have walked the streets of Troy and have seen no wooden horse.  It is as grand as the Elysian fields to which I aspire.  Live life!  It is grand!