We are blessed with two wonderful, young and vibrant families as neighbors, one on our left, the other on the right. Adam – to my left – acquired a kayak a few days ago and was anxious to log his maiden voyage on the Kinnickinnic and I enthusiastically volunteered to join him. Friday, May 31 was the chosen day, 0800, the appointed hour.

We could not have picked a better day. The sun was full and the temperature in the mid-sixties as we launched our kayaks at the base of the dam in Glen Park. We’ve had rain, and the Kinni’s flow rate at 159 cubic feet/second was higher than I’ve kayaked the river at. I’ve read that the ideal flow rate for kayaking the Kinnickinnic is between 110 – 150cfs. I was looking forward to running at the higher rate. That said, I will never kayak the Kinni at a rate higher than 130cfs. You’ll soon learn why…

The Kinni gets very busy on weekends, but during our run between 0800 and 1100, we encountered no other kayakers and only a handful of friendly fly fisherman who reported that the fishing was good.

A Matter of Flow Rates 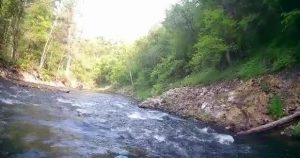 The first hour of the 8-mile run is the easiest. I told Adam I preferred the faster flow rate because the river is higher. At lower rates, I’ve bottomed out two or three times over the run and had to portage, but less than 25 feet, which is of no consequence. At the higher flow rate, I never bottomed out, BUT…

Over the course of three hours, I flipped into the river four times. Frankly, though embarrassed in front of Adam, a first-time kayaker, I found the water refreshing, probably around 60-degrees, and the sun warmed me up quickly. I suspected that my bargain kayak was taking on water and the moving water inside the craft gained momentum through class-2 rapids, which made it unstable and resulted in the multiple dunkings.

Disaster nearly struck at the midway point of the run. After capsizing and righting my kayak, I noticed that the cover to the ‘dry storage’ hole was open. Not good. That is where I ‘secured’ my vehicle keys. The storage container was empty! Unbelievable, as I gazed into the 3-foot deep water that rushed past me, I thought I saw the keys! I plunged in and surfaced with keys in hand. I blessed myself and thanked God. I think the incident gave Adam pause to rethink his religious point of view, whatever it might be.

I love the peace and solitude of kayaking on the river. Of the many sensations that overwhelm the senses, the one I love most is the sound, which is best as one approaches and navigates the rapids, which are louder at the higher flow. A run down the Kinni includes 50 to 60 sets of Class 1 and Class 2 rapids. It is not the Colorado River, but challenging and rapid enough to require the respect of kayakers. The local kayak outfitters suggest that only intermediate and advanced kayakers attempt the lower Kinni. After 14 runs last year, I consider myself intermediate, at least I did before this run!

The real lesson came with about a mile remaining. What normally takes about 20 minutes for the final mile was closer to an hour… I could see the approaching rapids and noted a sharp turn to the right with a challenging switchback to the left. A large tree had fallen into the river at the point of the switchback. I considered pulling in and portaging across but mistakenly concluded that I could make the sharp turn through the rapids to avoid the tree. I was wrong. I slammed into the tree and overturned. The strong current pinned me and my kayak against the tree and Adam could not avoid us as the water propelled him through. 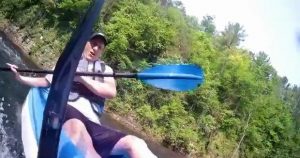 My oar is attached to the kayak with a thin, coated metal cable, the thought being that if I fall out of the kayak, I maintain my grip on the oar thereby not losing the kayak. It has always worked. In this situation, however, the kayak and oar – though still attached – were independently entangled in the tree branches. I momentarily released the oar and worked against the strong current to extricate the boat. With no warning, the metal cable snapped and the oar disappeared like a powerful projectile down the river. I was literally up a creek without a paddle.

After considering our limited options, Adam and I agreed that he should continue down river and, once beached at the parking area, walk the paddle upstream while I walked my oarless kayak downstream. Inconvenient but logical. Walking over and through a rocky riverbed is challenging and progress is slow. As I approached a smooth area of the river, I made my final mistake: I decided I would sit on the kayak and ‘float’ downriver. What seemed like a good idea proved differently. I was late in my effort to disembark and stop before hitting another set of rapids. When the kayak overturned, I had no oar to hold onto; I struggled to keep hold of the kayak as it pulled me, headfirst downstream. I worked hard to get my feet downstream while still holding the kayak. I finally succeeded, but I emerged from the water with a goose egg on my right shin and multiple bruises and scratches on both arms and legs from the many rocks I haplessly encountered.

I met Adam about 200 yards from the pull off point, and finished the run with the paddle Adam tossed me.

That, friends, was an adventure. MOST importantly, I learned some very valuable lessons.

Too many times, we tend to over-estimate our physical capabilities. For me, it happens more frequently the older I get. Regardless of one’s age, we need to be honest with ourselves when accepting challenges that do present physical challenges. Will I continue to kayak? You bet I will. I too much enjoy the sport and the beauty and physical activity that comes with it, but in the future, I will take the necessary precautions I have ignored in the past.

The moral of the story: understand your abilities AND your limitations and NEVER ignore the necessary precautions you should take to ensure the safety of the activities in which you engage. Lesson learned.