With the Kinnickinnic River a short drive from the house and inspired by the thought that I can take my grandchildren on a grand adventure, I acquired a tandem kayak that is easily converted to a solo kayak.  Grandson Travis will be the first victim, but we will wait until summer vacation in just a few weeks before our first trip.  In the meantime, I took the maiden voyage this morning to ‘test the waters.’

The experience was memorable and will count with other adventures like hang gliding with Honi in Alaska in 1973 when we introduced the sport to the last frontier.  I look forward to getting the grandkids on the river.

Mrs. tVM ingeniously figured out how to attach the kayak on top of the Escape for the 3-mile ride to the river where I launched from Glen Park at 7 AM just beneath the dam.  The fact that the sky was cloudy and the temperature a bit chilly in the mid-50’s did not affect the equation other than to spark the imagination with thoughts of doing it again on a sunny day with warmer temps.

Encounter with a Bald Eagle

I was wet and cold when I climbed from the river 2 hours 40 minutes and 12 miles later at the bridge on Highway F.  My shoulders were a bit sore, but my spirits soared with the Bald Eagle I communed with midway through the adventure.

Through nearly three hours, I encountered one human – a fly fisherman – a deer, muskrat, the bald eagle, many Great Blue Herons who share the river with Canadian Geese and Mallard Ducks, too many songbirds to mention and countless trout rising for the gnats that dared fly too close to the surface of the water.

I took pictures with my cell phone that I kept in a waterproof bag around my neck.  The quality’s not bad.  I wanted so much to take pictures of the rapids that rise – many times unexpectedly immediately after a 90-degree turn – but

learned quickly that it is wiser to keep both hands on the oars to maintain a true course and balance as I negotiated my path through them.

Music of the River

While the trip was filled with many highlights, the single most impressive was SOUND!  There is ZERO noise pollution on the Kinni when one travels solo on a day when other kayakers choose to stay at home.  The sound of the river is magical and the small streams that fall a hundred feet from the limestone cliffs on the bottom half of the river add unimaginable harmony to the main theme that the river plays.  Birds sing joyously and with abandon. 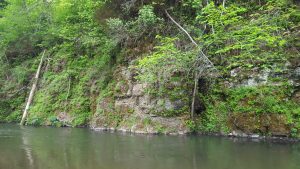 Geese and ducks allowed me to pass by showing no alarm.  It is their home and I respect them.  They made me a part of their peaceable kingdom.

I will sleep well this night satisfied that my spirit, mind, and body were in complete concert as it should be for a Vitruvian Man!  A final note…

Years ago, I read a wonderful book by Jesuit Al Fritsch titled Water Sounds.  In it, Father Fritsch creates a fictional narrative of Father Jacques Marquette who along with Louis Jolliet were the first Europeans to explore and map the northern portion of the Mississippi River Valley.  I thought frequently of the first paragraph of Water Sounds as I journeyed down the Kinnickinnic River early this morning…

The sound of water haunts me: trickling at the baptismal font gushing of the River Aisne; bubbling and gurgling at the patio fountain outside the window; crashing waves during the great Atlantic crossing; the wound of the word “water” in a half dozen native tongues; the murmur of distant rapids while paddling up the Ottawa River; splashing of the whitefish at the Sault Ste. Marie cascades; ebbing and flowing of tides in the icy waters at La Pointe; ebbing and flowing of waters at the island lakeshore in summertime; the tingling as snowflakes fall and crunching sound of walking through new-fallen snow; spring sun-kissed lapping of undulating waves as we departed St. Ignace on the great expedition; roaring of the rapids on the coursing Fox River; swishing movement of the distant Mississippi from the confluence overlook; rushing of the current as we near the Illinois; strange river noises on the waters at night; rushing and foaming as the Missouri joins the Great River; resisting as we ;paddle upstream; mixing with excited human voices on the Illinois shore; thrashing of a spilled canoe; raindrops beating at a canvas covering on a stormy night’ splattering as the icicles fall at our winter quarters on the Chicago; fain stirrings as sprinkled Easter Water touches the gathering; and now lake waves whispering, “The end is near.”