We first wrote and posted this six years on December 21, 2012.  Last night, December 14, 2018, Mrs. tVM and I watched “It’s a Wonderful Life” just as we’ve done every Christmas season for as long as I can remember.  It always moves me in ways I can’t say much better than I did – with the help of producer/director Frank Capra – on that winter solstice in 2012…

As every year closes, I find myself breathing deeply and raising my sail to catch the wind of God’s breath.  As I do, I take stock of what I did and of what I 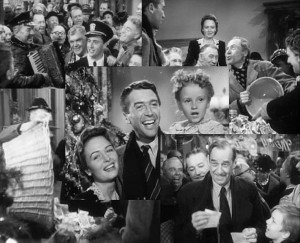 failed to do.  From the winter solstice through the end of the year, I am especially attentive to those soft whispers that I am certain come from the lips of my Creator.

Every day is a day to give thanks for what we have rather than weep about what we do not have.  I will live this day as well as I can, and I will contemplate how my actions today can help make the world a better place tomorrow for me and for everyone whose path I cross.

Regardless of our circumstances, it is indeed a wonderful life.  Whenever life tries and tests me – which probably occurs for most of us quite frequently – I always remember the scene in “It’s a Wonderful Life” when George Bailey steps from his car after crashing into the tree, and I contrast that image with the final scene when George is surrounded by family and friends.  NBC airs this greatest of all films every Christmas Eve.  If you have never seen it, make this the year you do.

A week or so ago, I came across this excerpt from Frank Capra’s biography The Name Above the Title.  Frank Capra was the director who brought us this film in 1946.  If you have never watched this movie, Mr. Capra’s words might encourage you to do it this year.  If you have watched the film, his words will inspire you to watch it again.  It is a WONDERFUL LIFE.

And here is what Mr. Capra wrote….

“It’s a Wonderful Life” wasn’t made for the oh-so bored critics, or the oh-so-jaded literati. It was my kind of film for my kind of people….

A film to tell the weary, the disheartened, and the disillusioned; the wino, the junkie, the prostitute; those behind prison walls and those behind Iron Curtains, that no man is a failure.

To show those born slow of foot or slow of mind, those oldest sisters condemned to spinsterhood, and those oldest sons condemned to unschooled toil, that each man’s life touches so many other lives. And that if he isn’t around it would leave an awful hole.

A film that said to the downtrodden, the pushed- around, the pauper, “Heads up, fella. No man is poor who has one friend. Three friends and you’re filthy rich.”

A film that expressed its love for the homeless and the loveless; for her whose cross is heavy and him whose touch is ashes; for the Magdalenes stoned by hypocrites and the afflicted Lazaruses with only dogs to lick their sores.

I wanted it to shout to the abandoned grandfathers staring vacantly in nursing homes, to the always-interviewed but seldom-adopted half-breed orphans, to the paupers who refuse to die while medical vultures wait to snatch their hearts and livers, and to those who take cobalt treatments and whistle—I wanted to shout “You are the salt of the earth. And It’s a Wonderful Life is my memorial to you!”