Nearly a two decades ago, I wrote my first published novel, The Olympian, A Tale of Ancient Hellas.  I love to research, and I researched The Olympian with vigor.  Somehow, someway, my research led me to a short, Greek film titled “What Is That?”  I refer to it as “The Sparrow.”  The film was made in 2007 and I found it in 2008, the year before The Olympian was published.  It moved me as few films do, and I thought to save it. 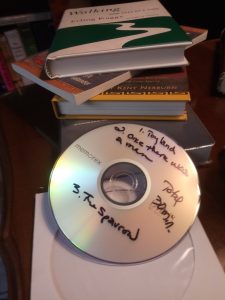 This afternoon, I reviewed a boxful of CDs I’ve made over the years.  I chanced upon a CD with three short films that included “The Sparrow” (from my Olympian research) and “Once There Was a Man” and “Toyland” (from The Hamsa research).  I took 30 minutes to watch them all.  I am grateful that I saved each one.