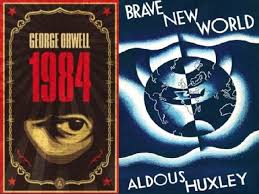 As a young man, I failed to read two important books that continue to be revered as classics, 1984 by George Orwell and Brave New World by Aldous Huxley.  Both describe a dystopian society of the future.  Huxley wrote his masterpiece in 1931; Orwell wrote his in 1949, the year I was born.  In his Writer’s Almanac this morning, Garrison Keillor informs us that today is the birthday of Aldous Huxley, born in 1894.  I am more familiar with Mr. Huxley’s essays on Perennial Philosophy.

Mr. Keillor’s anecdote this morning caught my attention when he discussed the similarities of the books.  “Brave New World is often compared with George Orwell’s Nineteen Eighty-Four (1948), since they each offer a view of a dystopian future,” Mr. Keillor writes, “Cultural critic Neil Postman spelled out the difference in his 1985 book Amusing Ourselves to Death:”

I find the differences and inferences startling. Censorship of the written and spoken word seems to be a thing of the past.  On the other hand, I fear the generation of ‘glow kids’ whose lives are focused on video screens rather than books.  There is great value in eBooks and my experience with my own novels is that readers purchase far more electronic copies than hard copies.  I prefer to hold a book in my hand, to turn, feel and smell the pages.  The question is, “Are we not reading as much as a society as we did thirty, forty, fifty years ago?  Are we better or worse for it?

The ‘information’ comparison smacks like a 2×4.  We are so overloaded with information that we don’t know fact from fiction, and social media further distorts the news media’s passive approach to ‘give the people what we want them to hear.’  Do we care?  This goes hand in hand with the authors’ perspective of truth.  I agree with both Orwell and Huxley.  There are truths that are concealed from us, while on the other hand, many truths are drowned in the irrelevance of the information overload.

Orwell and Huxley are in cultural agreement:  we have become captive to a trivial culture.  We are more inclined to escape into the world of superheroes than we are to face up to the day-to-day challenges every human being must accept and deal with.

Fear is not necessarily a bad thing.  While it can ruin us as Orwell suggests, it can also make us stronger.  Each of us wants (desires) more than we need.  Having wants is natural and not wrong.  When we become obsessed with our wants to the point of overlooking our needs and taking what we have for granted, things can take a bad turn and ruin may be in the offing.

Take a few minutes today to give some thought to Mr. Postman’s observations on these two giant authors and their masterpieces.  Most importantly…