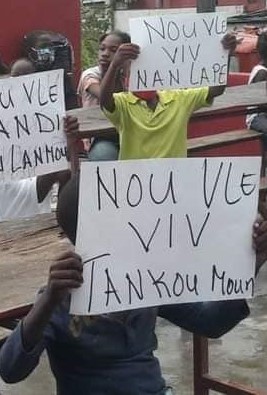 As a daily Mass attendee for six years, I’ve recited Psalm 102 many times as a responsorial psalm to daily readings.  I thought about it this week when my friend Justin posted this picture from our kitchen in Cité Soleil, Haiti.

I often wonder at pictures of children in distant countries holding signs written in English.   You’ll not find that in Haiti.

Because we work closely with these children through our association with Guepard Boxing Club [GBCCS], I wanted to know what message these children were sending to those who would pay attention and heed.

Although I always armed myself with the basics and reviewed them constantly when I visited Haiti, I am not fluent in Haitian creole.  I rely on Google Translate, which has evolved considerably through the years.

As the meaning of the words became clear, I realized that these children – and people like my friend Justin who inspire them to believe in these words – speak not just for Haiti, but for the entire world.

“We want to live in peace.”

Our plea for support in July enabled us to raise nearly $3,500, which enables our friends at GBCCS to continue feeding nearly 200 children in Cité Soleil four days each week.  We are funded through October, and The Haiti Project farm in Arizona has started to produce crops.  In July, we sold $90 at market.  We will approach $200 in August.