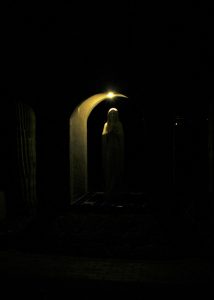 My Arizona homecoming is complete.

Yesterday morning, I attended early morning prayer and Mass at the Redemptorist Renewal Center. A new cadre of celebrants has replaced my old spiritual mentors Fras Paul, Greg, and Charlie, but Father Peter remains and we were able to chat for a few minutes.

People come and go, but the desert remains as constant as the North Star. It has no hidden agenda and is an open book for all who care to read it. During my three-year absence, tons of rushing monsoon floodwater has been unable to reshape the wash that Mrs. tVM and I walked so many times from 2009 to 2016. As Thomas Merton wrote in Entering Silence,

“Christ has sanctified the desert and the wilderness shines with promise.”

I entered the desert this day to view two iconic landmarks, one natural and ageless, the second created by my hand, both, hopefully, to stand for centuries to come. 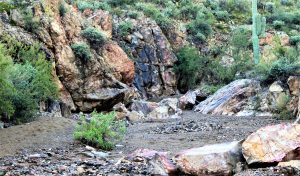 The first, the Crucified Christ. I had passed this sight unawares a hundred times, then one day, the vision leaped from the rocks. From that day forward, I could not pass this image in the rock wall of the wash without contemplating the truths of creation, those things written by the hand of God in every leaf and every stone. I am 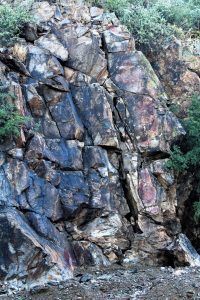 humbled in its presence and whisper a thankful prayer. Some people fail to see what I see in these rocks. I think it’s similar to the bell in Chris Van Allsburg’s wonderful story The Polar Express. Look closely and you will see it.

The second, the medicine wheel I constructed on my failed vision quest in 2013. I was pleased that it still turns though it needs some care, which Mrs. tVM and I will render in the coming weeks and months. I bowed dutifully to the seven directions – north, south, east, west, up, down and inward – and offered praise and gratitude. 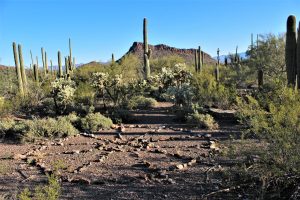 No clouds blemished the deep blue Arizona sky as I hiked back to the RRC. I contemplated this homecoming. Some people think that to return to a place is to go back in time, but I’ve learned differently. To return is not to go back, but to go forward, to cultivate a new life, to experience a resurrection of my true self. I am blessed to re-invent myself yet another time and to begin this new chapter of my life replete with the wonder that surrounds it.

Each of us is afforded opportunities to move forward in life.  The secret is to recognize them.  A final word from Thomas Merton, also from Entering Silence,

“God makes us ask ourselves questions most often when He intends to resolve them.”