Over a year ago, Dwight and I spread a thin layer of wood chips – he calls them compost, but to me, they are wood chips – over the acre or so we are trying to cultivate as the first step to ‘green’ 20 acres Dwight manages for the Desert Rose Baha’i Institute in Eloy, Arizona.  We followed that with an even thinner layer of manure and hosed it down with water.  We covered the area with a tarp thinking it would help – with what little water was there – to convert the wood chips, manure, dust, and caliche into usable soil.  Arizona desert winds can defeat the heaviest of sandbags.  The tarp didn’t last long.  Margaret Mitchell had it right… Gone with the Wind.

After several months, it was difficult to discern the clumps of manure.  Maybe they melded into the ground.  I think the manure disappeared.  Intergalactic aliens are a common occurrence in the Arizona desert.  After several months, all I could see was an acre or so of dust and caliche covered sparsely with wood chips.  Caliche, by the way, is a sedimentary rock, a hardened natural cement of calcium carbonate that binds other materials—such as gravel, sand, clay, and silt.  I liken it to concrete.

If we expected to harvest something this year, anything, in June, we had to get something into the ground.  In January 2021, we determined we could delay no longer.  We marched out a rectangular plot and marked it with stakes and string, some 200 feet by 200 feet.  Close to an acre and not exactly square, but it was close enough.

The desert is populated by small vermin, rabbits, ground squirrels, and the like that would feast on the vegetables we planned to lay in, so before we considered planting, we erected a 4-foot tall, small-meshed wire fence around the complete perimeter.  The wire extended 6 inches into the ground to discourage burrowing.  We received much help from my youngest son and his family.  With the exception of using a ‘trencher’ to dig the ditch to set the fence in, we raised the complete 800+ feet of fence with posts every eight feet, by hand.  Manual labor of that intensity offers great reward to the laborer.

From February 6 through March 27, we started over 1,200 seeds in our hoop house and put over 500 transplants in the ground.

Early on, we experienced some vermin activity.  We inspected the entire perimeter for holes and burrows and found none.  We suspected the intruders were entering through a small space near the gate. My friend Joe in Texas told me that a farmer friend of his in Georgia urinated on rags and placed them at likely entry points.  I took his advice – using my urine, not his – and we’ve had no vermin since. 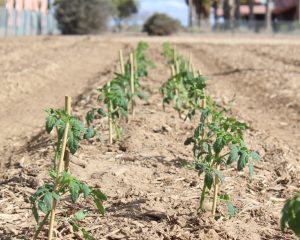 Every morning, we applied 300 gallons of water to the 3,000 sq. ft. plot.  While I am certain it maintained some level of life, few of the thousand seeds we planted directly in the ground survived, and the transplanted plants did slightly better.  The tomato plants did better than most of our plants but were wilted every morning until the water was applied.

We hand-harrowed our rows, but even that was like digging into concrete.

One week ago, Dwight determined it was time to create new, organic soil more favorable to the plants we were trying to grow.

This morning, four months after marching off the plot and raising the fence, we agreed it was time to re-till the original plot along with three new 3,000 sq. ft. plots we measured out adjacent to it.

You may recall that the original plot was intended to support our friend Justin and the children he feeds in the Cité Soleil ghetto in Haiti.  We always refer to that plot as “The Haiti Project.”  We remain committed to it, but without revenue from the project until at least October – the next market season – we must rely on the generosity of people like you to feed the children until the garden produces a harvest we can sell at the farmers market. 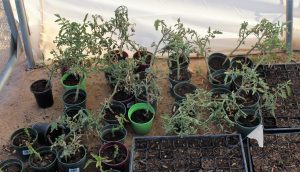 Mrs. tVM accompanied Clarence and me this morning to attempt to save the strongest tomato plants and transplant them to our backyard.  As she looked over the plot, she came up with a better idea: she decided to transplant ALL survivors that ‘showed green’ and hold them in the hoop house for two weeks when we expect to have the four, 3,000 sq. ft. plots harrowed with the new soil we are making with a good dose of biochar.  In total, she is attempting to save approximately 20 tomato plants, 10 pepper plants, half a dozen beets, and a handful of cucumber.  While that may not sound like many, it’s far more than the three tomato plants we intended to rescue when the day began.

Moving forward, we plan to have re-planted the original plot by the end of May and will plant the other three over the following three months AFTER applying an appropriate dose of organic soil.

Greening the desert is quite challenging, but with commitment, perseverance, and patience, we will get the job done.  The Haiti Project is alive and well.