I suspected but did not realize the strength and uniqueness of my family until my 70th birthday.

I have never been a fan of birthdays, and would just as soon see them pass unnoticed as just another day.  This year, the year of my 70th birthday is different.  Living minimally and hermit-like and off the map in rural Wisconsin may have something to do with it.

Somewhat difficult to reach, I received two, physical birthday cards in the mail, one from my sister-in-law Barb and her husband George – she never forgets and her handwriting is precise – and the other from my nephew Sean and his partner Sheryl – he never forgets either and forever expresses unspoken thanks for the six years he lived with us as a young boy in the 80s.

Late Thursday afternoon – two days preceding the actual date of my entry into this amazing world – I was carrying my two gallons of water from the field pump back to my hobbit house.  Clarence looked down the dirt road and began to bark.  An unfamiliar vehicle with Minnesota plates approached.  My friends Pete and Bonnie who live at the end of the road were not at home, so I walked back to investigate.

The door opened and my youngest son Jesse emerged followed by his wife Erica and two boys, Jackson and Rome. “Hi, Pops,” he offered me his preferred greeting and a hug.  “We decided to come out for your birthday.”  I was pleasantly stunned.  They flew out from Arizona.  We visited for a while and after the grand tour of my small hut and its surroundings, they drove back across the St. Croix River to Minnesota where they would stay with his sister and her family and Mrs. tVM who waits patiently for the house out here to be built.  “We’ll be back tomorrow morning.” 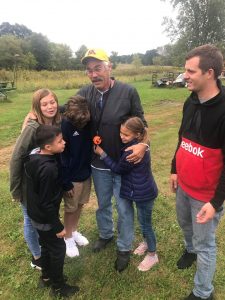 Indeed, the following morning, Clarence raced down the road at the sound of approaching vehicles.  Who can this be, I wondered as a caravan led by Jesse cleared the large oak trees.  The nature of the visitors never occurred to me until middle son Brad, wife Felicia and daughters Xylia and Lyla stepped from one vehicle, and oldest son Nick, wife Terri and son Alix climbed from the third vehicle with Mrs. tVM.  I was completely surprised and taken totally unawares and could not restrain a steady flow of joyfully heartfelt tears.  My three sons and their families had colluded and planned this surprise visit for months; all three live in Arizona, and oldest grandson Alix – 26 – flew up from Florida.

We celebrated at our daughter Stef’s home in Minnesota with her sons Travis and Max while her husband Dave prepared an extraordinary meal.  We were joined by Dr. Ralph Pim – professor, coach, and leader – who has worked with Stef and her teams since her days coaching at West Point.

For three days, I have been overwhelmed by the love, generosity, and fellowship that each of my sons and daughter, their spouses and children extend to each other on a routine and regular basis.  They communicate frequently with each other and are always ready to help when one is in need.  In a world where dysfunctional and disparate families are too often the by-product of our age of materialism, where people are content to stare into video screens instead of each other’s eyes, Mrs. tVM and I are truly blessed that our family still cherishes the coherency of frequent communication and chooses to celebrate special occasions assembling in a single location together.