The lawlessness and chaos of recent days are greatly disturbing. 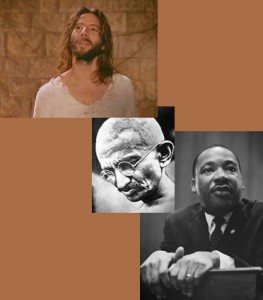 Many years ago, I defined my three greatest heroes as Jesus, Gandhi, and Martin Luther King, Jr.  They were extremists and the three men have made the most profound and positive impact on humanity since hominids began to walk upright.  Common to each is his conviction that love, not hate will triumph.  When direct action was necessary, each reacted in a nonviolent way.

While others strive to distort the message, their universal truth will survive and endure.

There is no need to ask what Jesus, Gandhi, and King would think about recent events in America.

I was 60-years old before I read Dr. King’s “Letter from a Birmingham Jail” the first time.  I have read it many times since and have posted it on this website three separate times – August 2011, April 2016, and most recently August 2018 – with the hope that other people will read it.

Distraught at current events, I read it once more this morning.  Like the Declaration of Independence and the Constitution, “Letter from a Birmingham Jail” should be mandatory reading for all citizens of Earth.

It occurred to me this morning how few Americans understand the basic documents that govern this country.

Dr. King wrote his letter from jail just as the title suggests.  He wrote it in response to published criticism by clergyman directed at his nonviolent demonstrations in Birmingham in 1963. 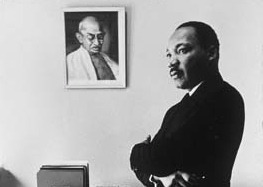 Dr. King’s nonviolent, direct actions influenced President John F. Kennedy to propose civil rights legislation that became the Civil Rights Act of 1964. The act opened America’s social, economic, and political system to African Americans and other minorities, including women, the disabled, and gays and lesbians.  Dr. King was an extremist like Jesus, but each took direct action in a nonviolent way.  In his letter, Dr. King writes, “… the question is not whether we will be extremists, but what kind of extremists we will be. Will we be extremists for hate or for love?”

To watch the uncontrolled violence that rages in American cities says much – regrettably – of those who stand before flaming storefronts with one fist raised ‘in protest’ and the other firmly holding a stolen TV.

In his letter, Dr. King wrote…

“In your statement you assert that our actions, even though peaceful, must be condemned because they precipitate violence. But is this a logical assertion? Isn’t this like condemning a robbed man because his possession of money precipitated the evil act of robbery?

“Society must protect the robbed and punish the robber.”

While Dr. King’s peaceful actions were condemned, I hear too many excuses to pardon the selfish and violent actions of the anarchists who have no idea of who or what they stand for.

If you have not read “Letter from a Birmingham Jail,” I encourage you to do it.