Over a month ago, we posted that the Haitian Ministry of Education had delayed the September 3 school opening to October 3.  October 3rd has come and gone.  Schools remain closed.

“I have the delicate mission of bringing, before the Security Council, the cry of distress of an entire people who are suffering and to say, in a loud and intelligible voice, that Haitians do not live. They survive. I speak on behalf of the four million children who have been unable to attend school because of gang violence.”

“Gangs continue to injure, kidnap, rape, and kill…  Economic deprivation makes people more vulnerable than they have been in years. Gang violence is severely hampering the humanitarian response to a resurgent disease [cholera] as well as hunger, with a record 4.7 million people facing acute hunger, including tens of thousands on the brink of starvation. The urgency of the situation is tearing the political and social fabric of the country… To support Haitian institutions in their quest for civic order and accountability – and to save thousands of lives that would otherwise be lost – the members of this Council must act, and decisively, to help combat the persistent scourges that are insecurity and corruption in Haiti.”

As I’ve followed the plight of my Haitian friends and other marginalized people around the world, I’ve come to realize that talk is cheap.  We say the right things, but the action that follows is often too little, too late.

It, therefore, becomes incumbent on the common man to step up and be counted, to do what he can to help his brothers and sisters. 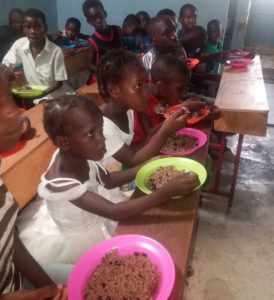 I cannot say when school will begin, and I am in daily contact with GBCCS manager Justin.  When school was last delayed on October 3rd until further notice, Justin suggested that we open our kitchen and offer daily meals to the children we have served for so long.  We agreed.  Because of the chaos, it took two weeks to transfer food money to Haiti.  Justin was able to retrieve the money last Friday and we began feeding the children yesterday.

I am humbled and proud that my fearless Haitian friends continue to operate our kitchen in the face of danger.  When the atmosphere improves, Justin and his comrades are prepared to begin the second year of our Barefoot School.  Please keep them in your prayers.