One week after we discussed the value of Abraham’s belief in our previous post, middle son Brad shows up at the house with a special gift.  Gifts are funny things.  You’re never quite sure how the receiver will take them.  With a few notable high-tech exceptions, Brad’s fairly good about giving gifts.  He knows that the long-term value has nothing to do with the cost or sophistication of the gift at the present time.  Yesterday’s gift is a classic example.

He handed me a bag and said, “This is special for you.” 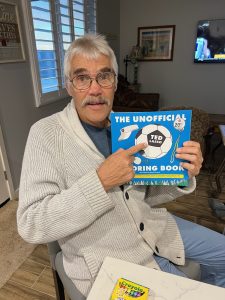 Inside was “The Unofficial Ted Lasso Coloring Book” and a box of crayons.  It is the perfect gift, and I am committed to coloring all 30 illustrations to the best of my ability.

My young friend Halen – an aircraft engine technician who works for my friend Dwight – introduced me to Ted Lasso late last summer during the three weeks I lived with him while they finished our nearby home in Eloy.  I was so impressed with the show that I subscribed to Apple TV when we moved into the new home specifically so Mrs. tVM could watch “Ted Lasso.”  She loved it every bit as much as I did.

From my perspective, “Ted Lasso” is about a man whose sole purpose in life is to lift the spirits of those he encounters.  He’s the type of person we should all aspire to be, many steps below Jesus, but unquestionably worthy of emulation. 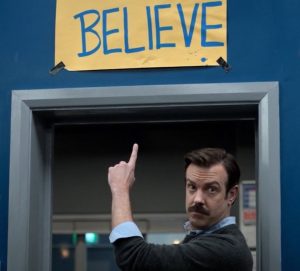 Ted Lasso is known for many quotable quotes.  Many are centered on the homemade sign he tapes above the door to his office at AFC Richmond, the fictional English Premier soccer team he coaches:  BELIEVE.  Ted explains his mantra frequently throughout the series in different ways.  To assistant coach Nate, Ted says, “I have a hard time hearing people who don’t believe in themselves.”  To his team, he asks, “I believe in belief. Now, where I’m from, we got a saying too, yeah? A question, actually. ‘Do you believe in miracles?’ Now, I don’t need y’all to answer that question for me… but I do want you to answer that question for yourselves.” 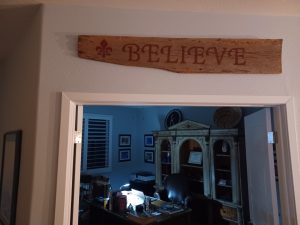 Hanging above the portal to my office is a sign that Mrs. tVM and I acquired years ago when we lived in Wisconsin.  That sign reflects what I wrote about in the previous post, and it perfectly encapsulates the message in my 2011 novel Tobit and the Hoodoo Man.

True to my commitment – and my delight with the special gift – I opened the coloring book early this morning to complete the first illustration.  Coincident with last week’s post on believing, my mindset a dozen years ago when I wrote Tobit and the Hoodoo Man, and life in general, the first illustration is Ted’s “Believe” sign.  I immediately went to work.  It didn’t take me long to realize that my coloring skills have severely atrophied since I was a young boy in the Berkshire Hills in the fifties.  Regardless, I gave it my best shot. 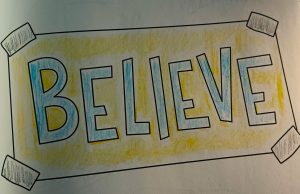