Originally posted in 2020, I believe this is worth re-posting.  Merry Christmas 2021.

I believe that Jesus has influenced and continues to influence more human beings than any person who has ever walked the Earth.  His message of unconditional love and forgiveness was and is plain and simple.  That is how he lived, simply:  he loved unconditionally and forgave without questions.  That is the example he set.  That is how it should be.

His message was diluted and his life redefined when the Roman Empire declared Christianity its official religion in the 4th century, first with Emperor Constantine’s Edicts of Toleration and then with Theodosius’ declaration of Christianity as the state church of the Roman Empire.  Those actions contributed to the expansion of the faith, but at a cost.  Christianity lost its identity with the core values of Jesus and assumed the temporal values of the empire:  title, power, and wealth.  Those three things defined a Christian… the grander the title, the better the Christian; the more power, the stronger the Christian; the more money, the more blessed the Christian.

Over many centuries, his title – the Christ – became associated with the celebration we know as Christmas.  If there is a logical reason to celebrate Jesus’ birthday on December 25th, it is that December 25th was the date of the winter solstice on the Roman calendar. 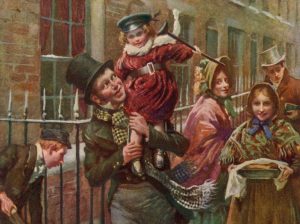 Christmas is as much a festival described in the works of authors like England’s Charles Dickens and America’s Washington Irving as it is an event commemorating the date on which Jesus was born, a date which no one knows.

Still, the meanings of Christmas – spiritual and secular – go hand in hand when we get to the heart of the matter.  While we should follow Jesus’ example of love and forgiveness 365 days each year, and while we should practice goodwill to all men 24/7, it is good that we consider and contemplate both for no fewer than the 12 days of Christmas… even for that single day we celebrate as Christmas because I believe if one dwells upon the life of Jesus and the goodwill men, women and children share during the Christmas season, one cannot help but live in the spirit of those good things for the entire year.  That way of life makes the world a better place to be.

The Christmas season emphasizes family, children, kind-heartedness, and gift-giving.  Keep all four in your hearts and minds as we share these special days in the wake of a challenging year.