I learned two new words in 2020, anthropause and Anthropocene.

Coined by a group of international researchers in a paper they collaboratively wrote in June 2020, anthropause means “a considerable global slowing of modern human activities, notably travel.”  This is how this group of researchers characterize the international lockdown to control the spread of COVID-19. 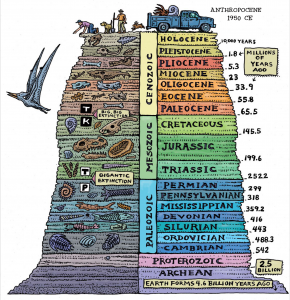 I add that word to my vocabulary with another recent addition, Anthropocene.  Anthropocene has been around much longer, devised in 2000 by biologist Eugene Stormer and chemist Paul Crutzen who won the Nobel Prize in chemistry in 1995.  According to the National Geographic resource library, the Anthropocene Epoch describes the most recent period in Earth’s history when human activity started to have a significant impact on the planet’s climate and ecosystems.  While some people suggest that the Anthropocene era began in the 1800s with the Industrial Revolution and others that the era began in 1945 when humans tested the first atomic bomb, in 2016, the Anthropocene Working Group – an interdisciplinary group of researchers that includes Paul Crutzen – agreed that the Anthropocene Epoch began in 1950 with the Great Acceleration, the dramatic continuous and roughly simultaneous surge in a large range of measures of human activity.

The words became important to me as I read Michael McCarthy’s essay “The Coronavirus and the Invisibility of Nature” that appeared on December 6, 2020, in Emergence Magazine.

I am inclined to believe what I read several months ago that COVID-19 is nature’s way of restoring balance to our ecosystems, the balance that has been seriously threatened by human interference on many levels.  Mr. McCarthy’s essay speaks to that issue.

Nature’s reaction to human interference spawned COVID-19, and human response to COVID-19 has been ‘lockdown.’

The landscape is changing along with the climate.  We interact less with nature – the greatest stress reliever – and how we do interact has been impersonal and ‘industrialized.’  Human activity is having a significant impact on Earth’s climate and ecosystems.

Nature will have her way and humankind’s most recent response is the anthropause.

“The effects on the natural world… have been spectacular, and nowhere more so than in the city of Jalandhar in India, whose inhabitants awoke one morning in April to [see]… the snow-capped Himalayas more than a hundred miles away.  Such has been India’s load of air pollution – from transport, energy generation, and industry – that more than 850,000 inhabitants of this city in the Punjab had not seen the distant peaks for more than thirty years, yet two weeks after the Indian coronavirus lockdown began, the air pollution had plunged so much that they were suddenly discernible…”

There are too many lessons to be learned from the anthropause to list.  From my perspective, if we can learn from Nature, all of creation will be the better for it.