According to Wikipedia, ‘bipartisanship’ is a political situation in which opposing political parties find common ground through compromise.  As an adjective, ‘bipartisan’ suggests the agreement or cooperation of two political parties that usually oppose each other’s policies.  In today’s political environment, the word ‘bipartisan’ is tossed about like a cheap dinner salad thrown together as an afterthought with no commitment, no sense of cooperation, and no willingness to compromise.  As America has evolved in recent years, bipartisan means, “I will work with you if you agree with me.”

We began this week honoring Dr. Martin Luther King, Jr.  Midweek, I propose we take a lesson in bipartisanism and leadership from two other great Americans who initiated the reunification of a broken nation 160 years ago when all seemed hopeless.  Their bipartisan actions on an April 1865 day in Appomattox, Virginia preserved a failing nation.

Today is the birthday of Robert E. Lee.  He was a West Point graduate, and President Lincoln offered him a position as a Union Army commander. Lee was loyal to the Union and didn’t believe that the South should secede, but he was even more loyal to Virginia, and when his home state declared its secession, he committed himself to the Confederate cause. 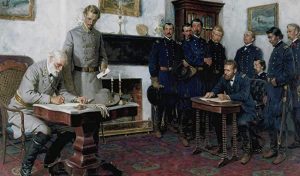 Five years later as General in Chief of the Armies of the Confederate States, General Lee confronted General Grant’s Army of the Potomac at Appomattox.  Surrounded and vastly outnumber, Lee could see the cause was lost.  Rather than engage in yet another blood bath, Lee and Grant exchanged letters and arranged for Lee’s surrender.  As Garrison Keillor wrote in his “Writer’s Almanac”,

“Rather than imprison the Confederate men in their defeat, Grant acted magnanimously for the good of a newly reunited Union. He allowed the men to return home, sparing their pride by allowing them to keep their arms and their horses for their upcoming spring planting. He also offered 25,000 rations to the soldiers, who had been starving without rations for several days. When Grant’s men began celebrating Grant ordered them to stop. “The Confederates were now our countrymen,” he said, “and we did not want to exult over their downfall.” From that day forward Lee would never allow another man to speak unkindly of Grant in his presence.”

The two leaders acted in a bipartisan way for the good of the nation moving painfully toward reunification.  Several years after Lee’s death in 1870, Georgia Senator Benjamin Harvey Hill said of General Lee,

“He was a foe without hate; a friend without treachery; a soldier without cruelty; a victor without oppression, and a victim without murmuring. He was a public officer without vices; a private citizen without wrong; a neighbor without reproach; a Christian without hypocrisy, and a man without guile. He was a Caesar, without his ambition; Frederick without his tyranny; Napoleon without his selfishness, and Washington without his reward.”

These two men, Lee and Grant, so different in demeanor – one sophisticated, the other a rough rider; one a Rebel, the other a Yankee – set a standard for cooperation that America desperately needs today.

Let their example not be in vain.