On this day in 1890, legendary Lakota Indian Chief Sitting Bull was gunned down by Indian Agency Police on the Standing Rock Indian Reservation. No one remembers. Earlier this year, ‘Standing Rock’ was front page news. Many of you raised your concerned voices. Six months later, most remember few details. I remember, and I remember that exactly two weeks from today, December 29th marks the 127th anniversary of the Wounded Knee Massacre. Two weeks after agency police murdered Sitting Bull at Standing Rock, the 7th Cavalry killed upwards of 300 unarmed Lakota men, women and children. Did you know that 20 of the U.S. soldiers received the Medal of Honor based on their participation in the massacre?

John Lennon asks us, “So this is Christmas, and what have you done?”

Sit quietly this evening and reflect on what you have done in 2017. 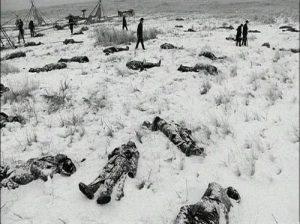 America vociferously acknowledges the wrongs the nation has done to many ethnic groups. That is good. We are less vocal regarding the atrocities we’ve imposed upon the people whose homes we stole. Consider these existing realities (posted on the Red Cloud Indian School website) on the Pine Ridge Reservation, the site of Wounded Knee:

The Pine Ridge Indian Reservation covers more than 2.8 million acres in southwestern South Dakota, making it the second-largest reservation in the United States and larger than Delaware and Rhode Island combined.

 The infant mortality rate is five times higher than the United States national average.
 More than 4.5 million cans of beers are sold annually in White Clay, Nebraska, just over the border from the Pine Ridge Indian Reservation. This amounts to more than 12,500 cans of beer a day. The reservation itself is dry.
 Obesity, diabetes, and heart disease occur in epidemic proportions on the Pine Ridge.
 Native Americans’ rate of amputations related to diabetes is three to four times higher than among the general United States population.
 Death rates due to diabetes among Native Americans are three times higher than among the general United States population.
 Unhealthy diets and lack of exercise are two main contributing factors behind these high numbers, despite the fact that in the early history of the Lakota, diabetes was virtually unknown.
 Life expectancy on the Pine Ridge Indian Reservation is the lowest in the United States—twenty years less than communities just 400 miles away—and the 2nd lowest in the Western Hemisphere. Only Haiti has a lower rate.

 Oglala Lakota County has the highest population rate of Native Americans in the United States, and the lowest percentage of Caucasians.
 About 70 percent of residents have attained a high school diploma, while 12.1 percent have attained a bachelor’s degree.
 On the reservation, 13 percent of residents lack complete plumbing facilities, while 9.2 percent lack complete kitchen facilities. Also, 22.8 percent lack phone service.
 The county (then named Shannon County) had the highest percentage of Democratic votes for President in the 2004 election of any county in the United States.

According to a news release by the Rapid City Journal in November 2008, South Dakotans rank 1st in the amount of average college debt owed upon completion of college.

When you return from your shopping excursion, think about one more gift, a small donation to support the children at Red Cloud School or St. Joseph’s Indian School. Remember their heritage and honor their heritage. America belongs to them.